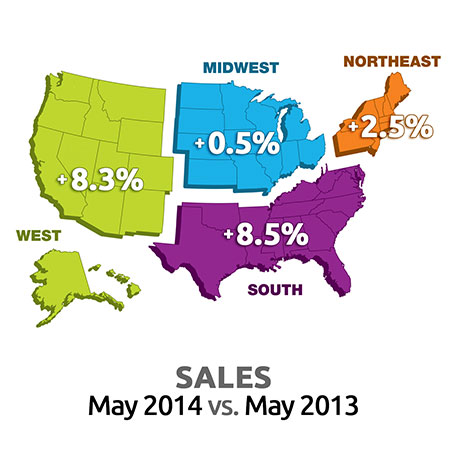 CHICAGO — Coin laundry owners in the South posted the strongest year-over-year sales results in the country in May, up an average of 8.5%, according to results of this month’s American Coin-Op StatShot survey.

Store owners in the West trailed close behind, with their May year-over-year sales up 8.3%. Operators in the Northeast and Midwest posted slight gains of 2.5% and 0.5%, respectively.

Whether they pay rent or own their own building, operators in the West report having the highest cost per square foot: an average rate of $40.08, survey results show. Some store owners in the region report paying as much as $125 per square foot.

Roughly 63% of respondents from the West say their real estate cost is unchanged from one year ago, while the remainder say it’s higher. No one in the region reported having real estate costs that are less than they were a year ago.

Coin laundry owners in the Midwest are paying an average of $9.60 per square foot for their facility. Individual reports place real estate costs as high as $12 per square foot. Compared to the same time last year, the cost has remained unchanged for roughly 83% of respondents. The remainder say it is higher. No one in the region reported having real estate costs lower than they were a year ago.

Roughly 57% of Northeast respondents say they are paying the same cost per square footage as they were last year, while 28.6% say costs are higher this year. The remaining 14.3% are enjoying lower real estate costs on average than last year.

For the majority (57.1%) of operators in the South, their cost per square foot is unchanged from this time last year, while roughly 43% say their cost is higher. No respondents in the region reported real estate costs being lower.

“The economy seems to be improving very slowly and in very small increments, but overall there are too many people unemployed, and too many empty buildings in this city,” says an operator from the South. “Not many businesspeople are willing to invest in this environment.”

Though many store owners in the South, Northeast and West report unchanged market conditions, one operator in the Midwest says things are “getting better.”

“[The] only competitor in this community of 15,000 closed their doors because of poor management/ownership. We are now the only coin-op Laundromat in this area,” the respondent says.