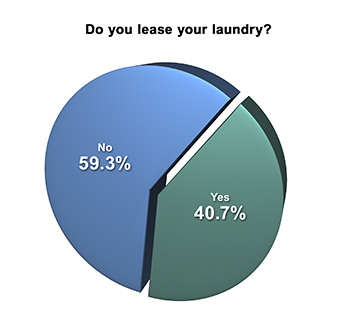 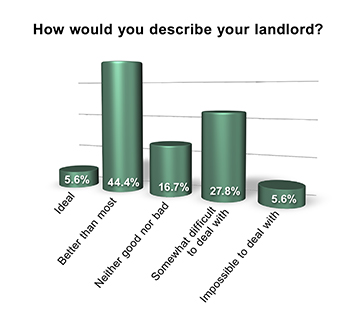 CHICAGO — The majority of coin laundry owners today do not lease their laundry, according to data compiled in this month’s American Coin-Op Wire survey.

Slightly more than 40% of owners say they lease their store’s property. Among the 59.3% of respondents who do not lease today, nearly three-quarters of them—71.4%—report they would never consider the option of leasing.

Approximately 14% would consider leasing, and the remaining 14.3% were unsure.

Of those who aren’t as pleased with their landlord, 27.8% say theirs is “somewhat difficult to work with” and 5.6% claim theirs is “impossible to deal with.”

If you lease your coin laundry, how knowledgeable are you about what the agreement entails? Among respondents, 45% say they are “comfortable with most details,” 30% “know the basics,” 15% “fully comprehend” the document, and 5% confess they “know very little” about it. The remainder do not have a lease.

No one who took the survey responded that they leave the lease details up to their attorney, but one operator did suggest consulting with one. “Hire a commercial real estate attorney, one who is familiar with commercial leases,” the owner says.

One area in which hiring an attorney can be beneficial is in understanding the details and “language” of a lease.

Though many coin laundry owners say that a lease language misunderstanding has never cost them money (61.9%), one-third say that such an incident has happened to them (33.3%). Only 4.8% are unsure.

“I looked at one laundry to buy (but) the lease (was) so bad you could not make any money,” recounts one store owner. “It had 18 ways to get in your pocket, besides being a triple net. Needless to say, we did not purchase it.”

While American Coin-Op’s Wire survey presents a snapshot of the audience’s viewpoints at a particular moment, it should not be considered scientific. Subscribers to Wire e-mails—distributed twice weekly—are invited to participate anonymously in an industry survey each month.