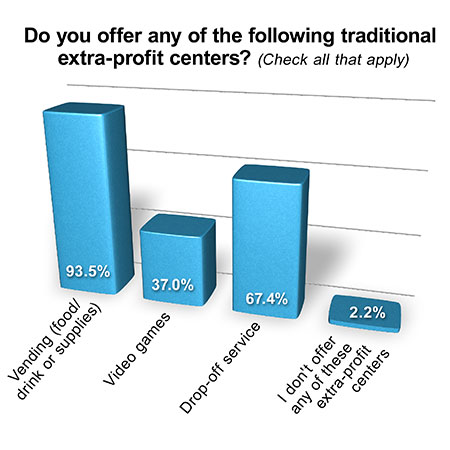 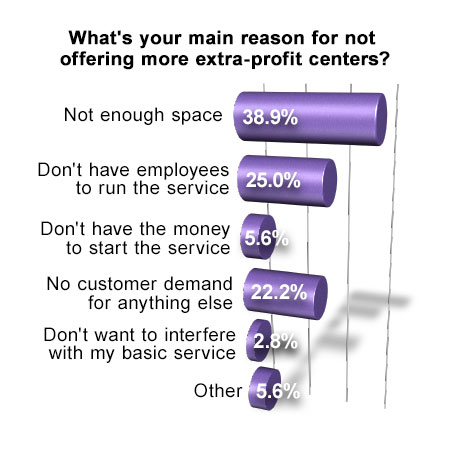 CHICAGO — When it comes to offering “traditional” extra-profit centers, the vast majority (93.5%) of coin laundry owners and operators provide vending machines (food/drink or supplies), according to results of this month’s American Coin-Op Your Views survey.

Roughly 67% of respondents have delved into drop-off service, and 37% say they offer video games to customers. While a small percentage (2.2%) say they do not offer any of these, 34.8% of overall respondents offer all three “traditional” extra-profit centers.

Other ancillary services that store owners say they offer run the gamut from alterations, to lottery sales and tanning beds, while one customer explains he/she has a “side” propane business.

Close to 40% say they do not have “enough space” to run an extra-profit center, while a quarter of respondents “don’t have employees to run the service.” Roughly 22% say they do not see a demand from customers for anything else, while 5.6% say they don’t have the funding to start another service, and close to 3% saying that they do not want it to ‟interfere” with their basic services. Roughly 6% cited “other” reasons, with one store owner saying he/she “[doesn’t] know what to offer.”

Roughly 71% of respondents say that offering an extra-profit center at their store has been a success, while 29.5% say they’ve offered an ancillary service they “ultimately deemed a failure.”

“[I] offered coffee,” says one respondent. “Competitor pricing and brand recognition was the cause of the failure.”

Another store owner says he/she looked into credit card services, explaining, “The cost was excruciatingly high for equipment and monthly fees. I decided to install an ATM instead, and that not only created a profit center, but negated the need for cards at the machines.”

While there are various ancillary services to look into, some respondents say that taking on commercial work is going to be “the next big extra-profit center,” with 28.9% of respondents believing this is the case.

While 17.8% of respondents believe otherwise, more than half (53.3%) are not sure if taking on commercial work is going to trend in the industry.

One respondent says that, in a perfect world, he/she would like to operate a dog wash as an extra-profit center, while another is interested in establishing an “Internet cafe with light fare and various device accessories.”

Another says he/she would like to set up video poker gambling at his/her coin laundry, explaining, “[I] had them in the past. Four of them would almost double my income of the Laundromat.”