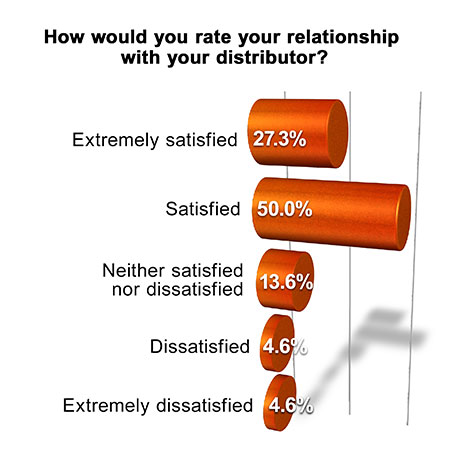 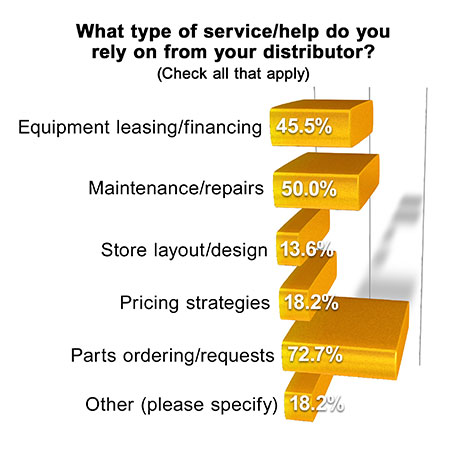 Only 9.5% say ‘highly likely’ they would change distributors

CHICAGO — Exactly half of the coin laundry owners and operators surveyed in this month’s American Coin-Op Your Views survey say they are “satisfied” with their relationship with their distributor.

While roughly 27% are “extremely satisfied” with their distributor, 13.6% are indifferent (“neither satisfied nor dissatisfied”).

Roughly 14% say it is “highly unlikely” that they would change distributors.

Close to 19% say it is “likely” that they will change distributors if given the opportunity, while 9.5% say it is a definite possibility (“highly likely”).

Regardless of their relationship with their distributor, the majority of respondents (72.7%) say they rely on them for parts ordering/requests, alongside maintenance/repairs (50.0%), equipment leasing/financing (45.5%), pricing strategies (18.2%), and store layout/design (13.6%).

Roughly 18% say they consult with their distributor for “other” reasons, like customer service and technical support.

Close to 64% of respondents say they attend their distributor’s open house/service schools, while 36.4% say they do not.

At these events, the majority of operators (54.6%) say they look forward to the “deals/specials on equipment.”

Roughly 23% of operators say they most enjoy the “technical/operational advice,” while 13.6% attend for the “equipment demonstrations.”

The remaining 9.1% attend these events for “other” reasons. No one who took the survey said they attend for “networking opportunities.”

One operator says his/her distributor has become his/her go-to for “advice, tech support [and for] parts and pricing.”

“I have not really used [my distributor] for anything, except for tech questions and parts, when needed,” says another.

“I wanted to replace almost all my washers,” another operator says. “My distributor didn’t have a good salesperson, so I changed to [another] who actually showed up, followed up and answered all my questions.”

“Customer service makes the difference with my business and all kinds of businesses,” he/she adds.