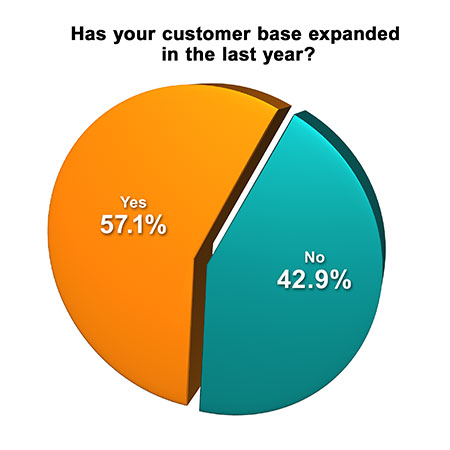 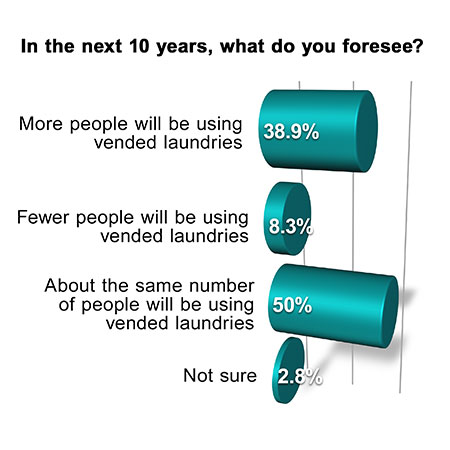 CHICAGO — It’s always good to gain more customers each year, and the majority of coin laundry owners polled in this month’s American Coin-Op Your Views survey say their customer base has expanded in the last year (57.1%), while 42.9% say theirs has not.

It’s been suggested that people having less free time are more likely to try a coin laundry once or twice. The majority of coin laundry owners polled (48.6%) say they are not seeing a bump in business to suggest this is true. Roughly 26% report that they’ve seen an increase in business from time-crunched customers, while 25.7% aren’t sure.

When asked from a customer’s perspective, and if using a coin laundry wasn’t a necessity, the majority of respondents (47.2%) said a “bright, clean store” would be the most important factor in attracting their business. For 22.2%, it’s the “ability to shorten washing/drying time.” Another 19.4% say that “equipment uniquely designed to handle a variety of needs” would do the trick. Equal shares of 5.6% lean toward “convenient hours” and “inexpensive prices” as being most important.

Why do you think people don’t try coin laundry services? Most respondents (63.9%) believe it is because people already have laundry equipment at home. A sizable share (16.7%) believe it’s because people are “creatures of habit.” Smaller shares point to customers not knowing how to use the equipment (5.6%), believing the service is too expensive (2.8%) or believing that a coin laundry is not safe (2.8%).

American Coin-Op’s Your Views survey presents an unscientific snapshot of the trade audience’s viewpoint at a particular moment; due to rounding, percentages may not add up to 100%. Subscribers to American Coin-Op e-mails are invited to participate anonymously in an industry survey each month.

Charlie Thompson II interned with American Laundry News earlier this year and is pursuing a degree in professional writing at Michigan State University.