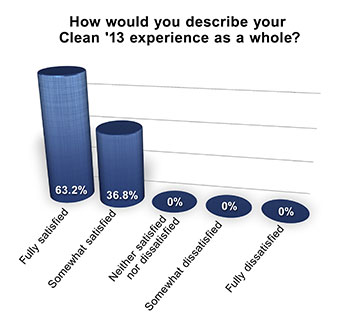 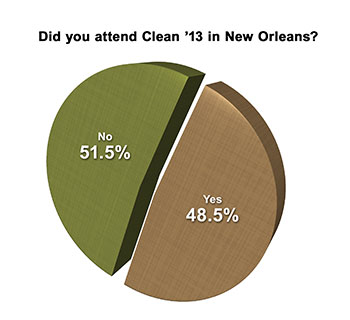 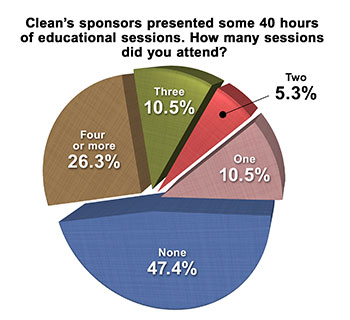 CHICAGO – The majority of coin laundry owners who attended Clean ’13 report having had a successful time at the event, with 63.2% of attendees feeling “fully satisfied” with their overall experience, according to results from this month’s unscientific Wire survey.

Approximately 49% of survey respondents attended this year’s show in New Orleans. Among the respondents who did not attend, most (60%) cited budgetary constraints as the leading factor. Other reasons included not being able to work the show into their schedule, and being satisfied with their past show experience. “[I have a] non-attended Laundromat and don’t have backup to watch [the store],” writes one respondent.

Some respondents welcomed Clean ’13’s three-day schedule, while one respondent felt that the show could have been shortened a bit more. “Three days was too much, from my perspective. The show could have ended anywhere from noon to 3 p.m. It should not run until 5 p.m. on the last day.”

“Some of the educational sessions did not have enough room for everyone,” writes one attendee. “The session on social media was packed. I would have thought everyone would know [it] would be really big.”

While some attendees sought to visit specific company booths, it was equipment such as top loaders, payment systems and flatwork ironers that garnered the most attention, according to the survey. Nine out of 10 respondents said they would be “more likely to do business with a certain manufacturer, distributor or supplier because of information received at Clean ’13.”

“I was really impressed with the technology of today’s equipment and feel that it will contribute to my success as a coin store owner,” writes a respondent.

While American Coin-Op’s Wire survey presents a snapshot of the audience’s viewpoints at a particular moment, it should not be considered scientific. Subscribers to Wire e-mails—distributed twice weekly—are invited to participate anonymously in an industry survey each month.