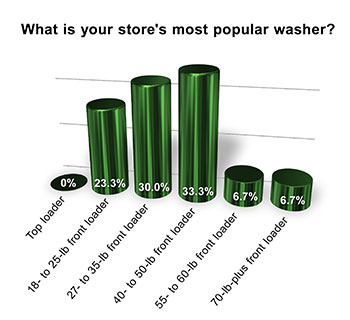 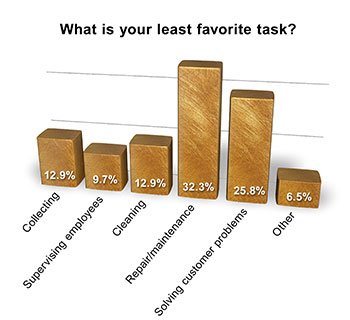 CHICAGO — They say you have to take the bad with the good. And so it is that American Coin-Op asked readers to list the best and the worst things about their store in this month’s Wire survey.

Soft drinks, by far, are the best-selling food/drink item at laundries. Roughly 52% of respondents say soft drinks are the No. 1 seller, followed by snack chips (19.4%) and water (6.5%). Approximately 13% of respondents say they don’t offer vended items in their laundry.

BUT IT’S GOTTA BE DONE

A CUSTOMER DID WHAT?

Respondents were asked to name the worst thing a customer had done to or at their laundry. Answers were varied, and some were downright disturbing. Incidents of theft (money, a toilet seat) and vandalism (poured beverages on floor, ripped off washer door) were most common. Following are examples of the rest:

No reporting on other related equipment? What about the popularity of a Bock Extractor or vended showers?

My 3 card-operated pay showers cost about the same to install as a 50# washer, but EASILY generate more revenue than any single machine in my laundromat - with the possible exception of the vending machine.