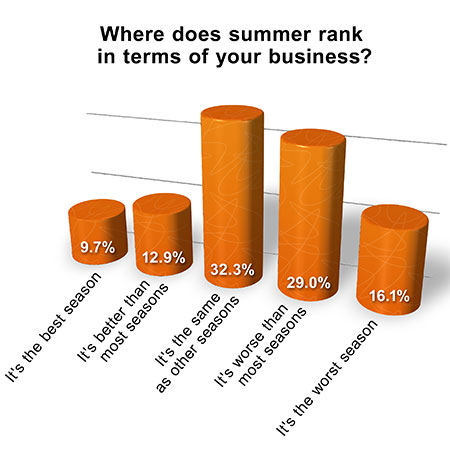 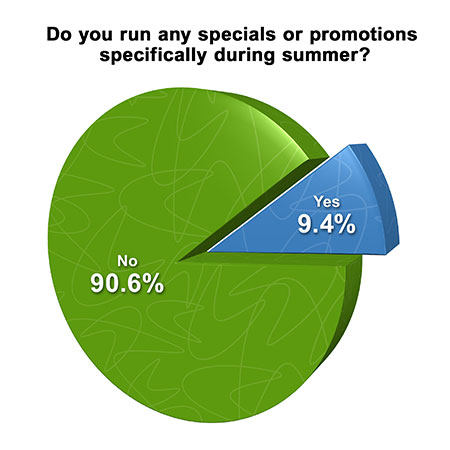 CHICAGO — As the summer months start to heat up, the majority of Laundromat owners and operators (32.3%) polled in this month’s American Coin-Op Your Views survey revealed that summer business is “the same as other seasons.”

Owners were also asked about customer habits changing in the summer. Approximately 52% say they see changes that affect operational aspects such as store hours and attendant scheduling. Nearly 42% of respondents say customer habits do not change during the summer, while 6.5% are not sure.

One store owner says they see “slow business due to traveling,” while another says there are “more vagrants due to the longer daylight hours and better weather.”

Almost 42% of store owners say they receive customer complaints about store temperature throughout the summer season, while 58.1% say they do not.

Several owners remarked that they spend more on electricity and air conditioning during the summer, with one saying “utility costs are higher (especially electric).”

Another explains that “keeping [the store] cool” is his/her biggest problem, while another store owner says he/she spends “more [on] utility cost due to hot weather.”

Operators say scheduling becomes a challenge during the summer.

“Covering employee time off” is a stressor for one respondent, while another says, “[The] timing is off—people do not run schedules when kids [are] out of school.”

One owner takes advantage of school being out, running a free-soap special for students during the summer months. But summer specials or promotions are not the norm for many Laundromat owners and operators—only 9.4% of respondents report running such specials.

One owner says he/she does not put up with kids’ shenanigans, saying, “We are strict that kids do not run around, yell or scream in the store.”

Charlie Thompson II interned with American Laundry News earlier this year and is pursuing a degree in professional writing at Michigan State University.