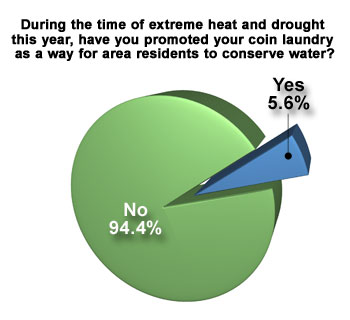 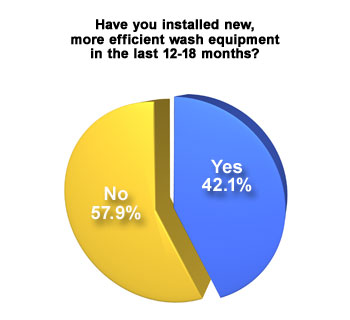 CHICAGO — The first half of 2012 was the hottest on record, and drought covered more than 60% of the contiguous United States as of mid-August. It seems like a good opportunity to promote a coin laundry as a way to conserve water. High-efficiency, commercial washers use as little as 0.5 to 1.5 gallons per pound of clothes laundered compared to home machines that typically use 2.5 to 3.5 gallons per pound, according to the Coin Laundry Association.

But in the results from this month’s AmericanCoinOp.com Wire survey, less than 6% of self-service laundry owners promoted their store as a way for area residents to conserve water.

And for the time being, it doesn’t seem that the drought has produced many local water restrictions directly affecting coin laundries. Only 5.3% of respondents reported that their local community had passed or enforced water restrictions that impacted them.

Meanwhile, the drought hurt at least one coin laundry in another way. “Farmers did not have the crops to use seasonal workers, which impacted our business tremendously,” the respondent wrote. But others remarked that there was no water shortage in their area and that the drought’s impact has been minimal.

It may not be related to the drought but 42.1% of laundry owners have installed new, more efficient wash equipment in the last 12-18 months.

Meanwhile, during that same time period, local utilities have raised the water rates charged to 68.4% of respondents.

Roughly 32% of laundry owners polled in this month’s survey said they have raised, or plan to increase, their washer vend prices in 2012.