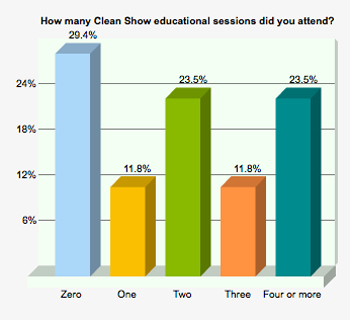 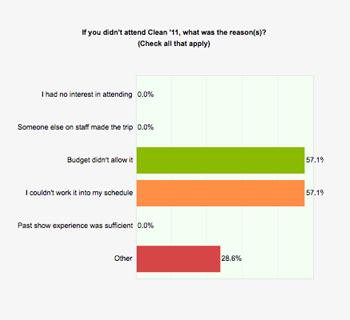 CHICAGO — The Clean Show’s educational sessions were a big draw for the self-service laundry owners and operators who attended the Las Vegas event, based on June’s unscientific Wire survey, as nearly a quarter of respondents said they attended four or more sessions.

Approximately 64% of respondents said they attended Clean ’11, and 63.4% of them reported being “somewhat satisfied” (46.7%) or “fully satisfied” (26.7%) with their experience as a whole. Roughly 27% were neither satisfied nor dissatisfied.

These attendees sought information about a variety of products and services. Among the exhibit categories that respondents sought out during the four-day show, washers, dryers and payment systems were mentioned most often.

Roughly 73% of respondents said they are more likely to do business with a certain manufacturer, distributor or supplier because of their trip to Clean. Twenty percent said they aren’t sure, and 6.7% answered no.

Most respondents attended Clean on Tuesday (72.2%) and Monday (66.7%). Attendance started to drop off on Wednesday (44.4%), and only a small group (11.1%) visited the convention center on Thursday, the final show day.

The 2013 Clean Show in New Orleans will open on a Friday and run through the weekend. Many respondents applauded the show committee’s decision to shorten the biennial event to three days but indicated that they hoped the educational sessions would not suffer. In fact, some respondents lobbied for three or four hours of sessions per day instead of the traditional one or two.

Respondents who didn’t attend Clean in Las Vegas most often cited budgetary constraints or scheduling conflicts as the reasons. One person said they had just opened a brand-new store and didn’t have need of equipment.

While the American Coin-Op Wire survey presents a snapshot of readers’ viewpoints at a particular moment, it should not be considered scientific.

Subscribers to Wire e-mails—distributed twice weekly—are invited to participate in a brief industry survey each month. The survey is conducted online via a partner website. Readers are encouraged to participate, as a greater number of responses will help to better define operator opinions and industry trends.