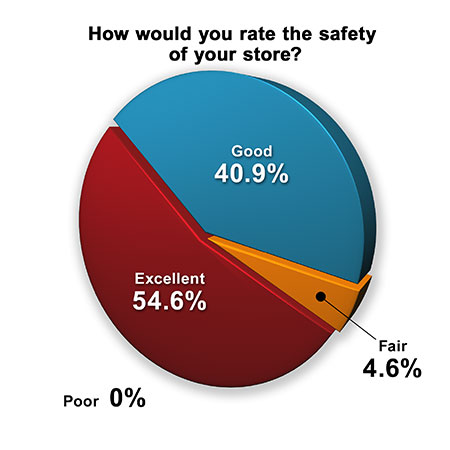 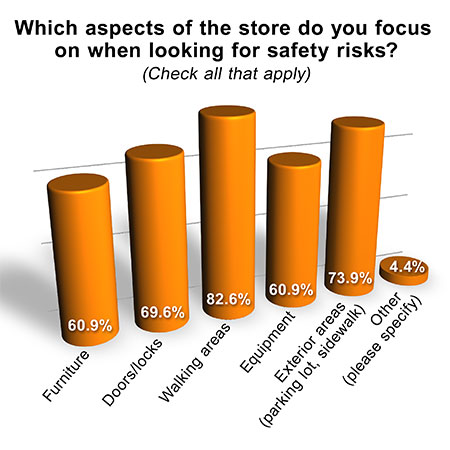 CHICAGO — Auditing a coin laundry store daily for any safety risks has become common practice for the majority of coin laundry operators (43.5%) surveyed in this month’s American Coin-Op Your Views survey.

Roughly 26% say they audit their store for safety risks on a weekly basis, while close to 13% say they do so month to month. No respondents reported auditing their store quarterly, while 4.4% say they do it yearly.

The remaining 13.0% of respondents say they “don’t audit [their] store” for safety risks.

“Inspect … the store for any and all safety-related items,” advises one store owner. “If you think it could be a safety risk, it is a safety risk. Take care of it.”

The use of surveillance systems is the most popular safety feature/practice that the majority (91.7%) of operators utilize at their store, alongside other features/practices, including alarm systems (54.2%), “displaying [the store owner’s] phone number” (54.2%), motion-activated lighting (12.5%) and an employee safety handbook (8.3%).

Close to 71% of operators believe that having an attendant can help ensure safety in the store, while 12.5% believe otherwise. Roughly 17% say they are not sure.

“A lady drove through our glass windows and struck a customer sitting in a chair years ago,” reports one respondent regarding an unsafe situation that occurred at his/her store. “We called the police. and they refused to write a ticket because it is private property. After a lively debate with [the police officer], the driver was cited, we swept up glass, boarded the window up, and were open for business the next day.”

“Just this week we had an individual loitering and using the free Wi-Fi,” reports another. “We asked him to leave when we saw him. He came back the other day and said some suggestive things to a female customer. When she called our number, I immediately rushed to the store, calling the police on the way. The police questioned him and told him not to come back. If he does, he can be ticketed or arrested.”