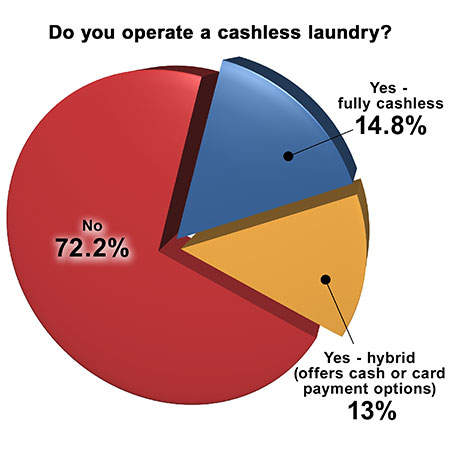 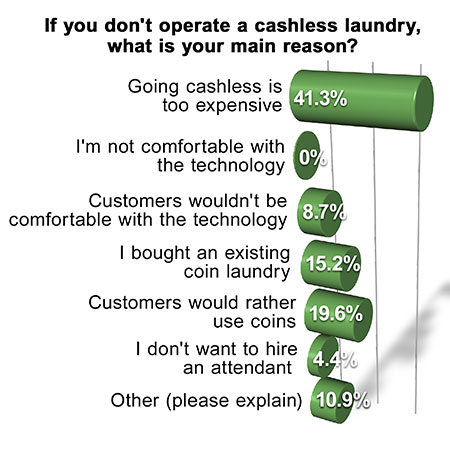 While 14.8% of respondents say their facility is “fully cashless,” roughly 13% say they operate a hybrid operation offering “cash or card payment options.”

The cost to convert to cashless payment systems is the main factor why coin laundry operators don’t pursue the change, with 41.3% of respondents saying it is “too expensive.” Other operators believe their customers “would rather use coins” (19.6%), while 15.2% say the store they bought is “an existing coin laundry.” Roughly 9% believe their clientele “wouldn’t be comfortable with the technology,” while 4.4% say they “don’t want to hire an attendant.”

Approximately 11% of respondents pointed to “other” reasons, with one saying, “When we built the store, there were no readers compatible with the vending machines.”

Regarding advantages of implementing cashless payment systems, “not worrying about collections” is the biggest draw for 56% of respondents, while 16% realize the technology’s “new marketing opportunities.” Equal shares of 8% are drawn to the advantage of advanced payment by customers, as well as “being able to change prices quickly.” Twelve percent of respondents listed “other” advantages, such as the “opportunity to have unattended hours.”

This is a huge reason why you need to consider implementing some form of Credit/Debit card into your business because NOT EVERYONE OFFERS IT!  Improve your offerings and people will beat a path to your door. If I wanted to be like everyone else, I'd be dirty, unattended, and have lots of out of order signs on old outdated equipment.

To put it a different way, Just 10 years ago, less than 4% of laundromats were card operated.  This segment has grown over 400% to 15% of the industry and an additional 13% have hybrid solutions.  Why wait?