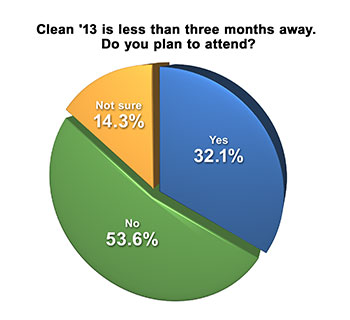 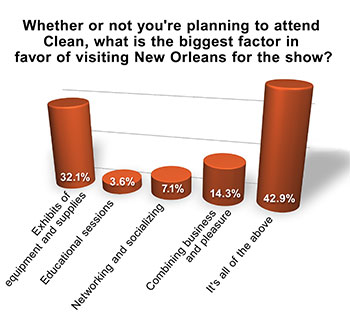 CHICAGO — Just shy of one-third of those responding to this month’s American Coin-Op Wire survey say they are planning to attend Clean ’13 in New Orleans, while another 14.3% are unsure at this point.

Approximately 54% of those responding to the unscientific survey say they will not be attending the biennial event slated for June 20-22 at the Morial Convention Center.

Asked about the biggest factor in favor of attending (whether they were personally planning to attend or not), 32.1% of respondents named “Exhibits of equipment and supplies.” Roughly 14% listed “Combining business and pleasure” as the chief factor, while 7.1% look to Clean primarily for its “networking and socializing” opportunities. Just 3.6% of respondents see “educational sessions” as the main factor in attending. The top response, however, is “It’s all of the above,” with 42.9%.

The Clean Show has been shortened from four days to three this year, which is OK with 78.6% of respondents. Just 7.1% “don’t care for this change”—“Include Saturday and Sunday in the schedule (and) make it four days if necessary,” says one operator—and the remaining 14.3% are “indifferent.”

Among operators who do not plan to attend this year’s event, 52.4% “Can’t afford the cost,” 28.6% “Can’t spare the time,” and 4.8% have “made other plans.” The remaining 14.3% have “other” reasons, some of which include disliking the host city, having no expansion plans this year, and working two jobs besides running his/her laundry.

Among the eight educational sessions being sponsored by the Coin Laundry Association (CLA) throughout the event, Coin Laundry Trends for 2013 is garnering the most pre-show interest among respondents, at 29.6%. Other popular topics are The Keys to Successful Multiple Store Management (18.5%), Ask the Laundry Experts (18.5%) and Best Practices for Wash, Dry, Fold and Commercial Accounts (14.8%).

While American Coin-Op’s Wire survey presents a snapshot of the audience’s viewpoints at a particular moment, it should not be considered scientific. Subscribers to Wire e-mails—distributed twice weekly—are invited to participate in an industry survey each month. The survey is conducted online via a partner website, and is developed so it can be completed in less than 10 minutes.