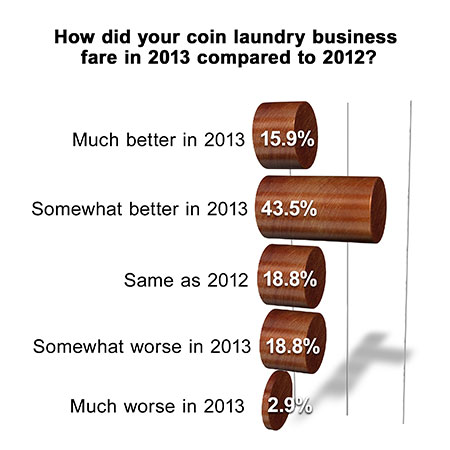 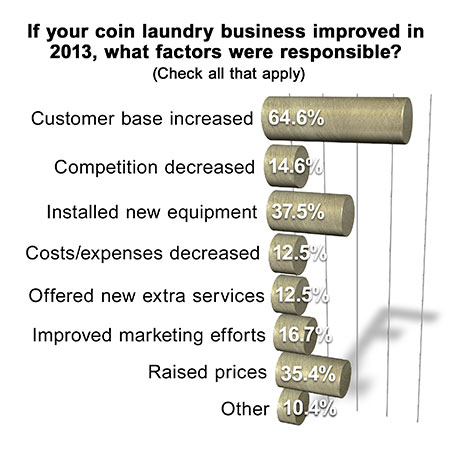 CHICAGO — The majority of coin laundry store owners polled (43.5%) say that overall business was “somewhat better in 2013” compared to 2012, according to results from this month’s American Coin-Op Your Views survey.

Roughly 65% of store owners say that a “customer base increase” was one of the reasons why their business improved this year, while 37.5% attributed the improvement to “[installing] new equipment.” More than 35% “raised prices” this year to improve business, while 16.7% “improved marketing efforts.” Some attributed the improvement to “competition [decreasing]” (14.6%), while equal shares of 12.5% say their “costs/expenses decreased,” and that they also “offered new extra services.” (Respondents were asked to select as many as applied from eight options.)

A little more than 10% gave other reasons as to why business improved, with one store owner saying he/she remodeled his/her stores, while another decided to create a website to increase business.

For those whose coin laundry business worsened this year, equal shares of 46.4% attribute the dip in business to “customers [cutting] down on number of visits” or “costs/expenses [increasing].” Roughly 30% say that their “customer base decreased,” while 21.4% say that “competition cut into business,” and 14.3% say that their “extra-service income dropped.” (Again, respondents could select any from a list of six factors.)

Some store owners stated other reasons (7.1%) as to why business worsened this year, such as issues with employee retention.

Regarding their memories of this past year, one store owner says, “My son has taken over; the new blood with modern ideas really work.”

“We made progress in our [remodeling] efforts and signed long-term leases at good future rent rates at key locations,” says another. “[We] also expanded in new and existing locations.”

“[We have] new competition,” adds another store owner. “Time to readjust [our] marketing plan.”

While some are glad that the year is almost over, another store owner is thankful they are “able to survive in a world that has small businesses failing on a daily basis.”