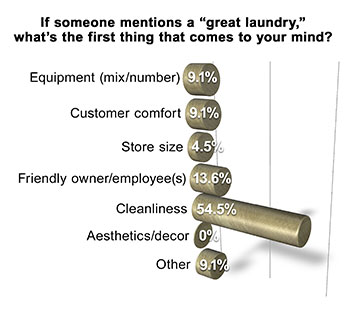 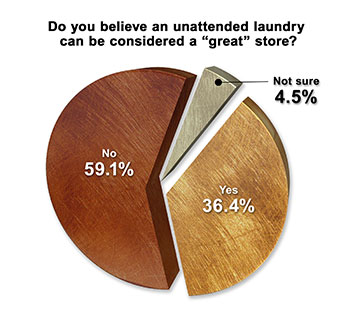 CHICAGO – Many factors can contribute to a coin-op laundry’s success, but a majority of operators (54.5%) surveyed in this month’s American Coin-Op Wire survey say that store cleanliness is the first thing that comes to mind when it comes to having a “great laundry.”

While other factors such as equipment mix/number and customer comfort received equal shares of respondents’ votes (9.1%), a store’s size (4.5%) and aesthetics/decor (0%) garnered little to no support for being the dominant aspect of a “great laundry.”

Next to cleanliness, operators attribute the friendliness of the owner/employee(s) (13.6%) to store success, while the remaining 9.1% believe that all aforementioned qualities were important in judging a store’s greatness.

Roughly 60% of those surveyed believe that an unattended store cannot be considered a “great” laundry, while 36.4% say that it can be and 4.5% are unsure.

When asked what factor is most “overrated” when judging a store, the top three features cited by store owners were store size (36.4%), equipment mix/number (27.3%), and aesthetics/decor (22.7%). Roughly 5% chose “other.” No one taking the survey singled out customer comfort or cleanliness.

In terms of what they believe is their store’s best feature, operators responded with a mixed bag. While some gave themselves credit for their employees’ customer service and their store’s cleanliness and atmosphere, one operator highlighted that his/her machines were never out of order.

While American Coin-Op’s Wire survey presents a snapshot of the audience’s viewpoints at a particular moment, it should not be considered scientific. Subscribers to Wire e-mails—distributed twice weekly—are invited to participate in an industry survey each month. The survey is conducted online via a partner website, and is developed so it can be completed in less than 10 minutes.

I'd LOVE to comment, but americancoinop.com never lets me!

My number one determinant of a "great laundry" is PROFITABILITY.

Great Survey. Should come as no surprise to anyone that cleanliness is the most important aspect of a "great laundry"!