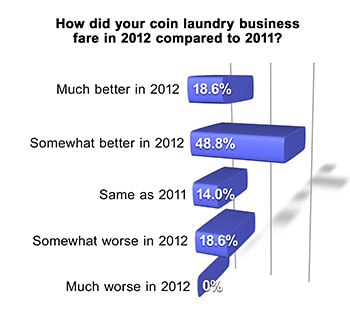 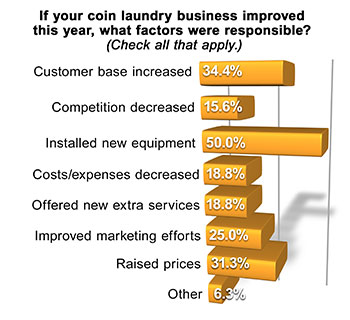 CHICAGO — More than two-thirds of self-service laundry owners and operators polled in the last American Coin-Op Wire survey of 2012 said their business was better (“much better,” 18.6%; “somewhat better,” 48.8%) this year than it was in 2011.

Operators whose business rose attributed it primarily to installing new equipment (50%), a larger customer base (34.4%) and/or raising prices (31.3%). Better marketing efforts (25%), lowering costs/expenses (18.8%), offering new extra services (18.8%), and decreasing competition (15.6%) were other important factors. (Respondents could choose from any or all among several suggested factors or offer their own.)

Among respondents who said their business worsened in 2012, a declining customer base and increasing costs/expenses were the biggest reasons, each selected by 45%. (Again, respondents could choose from any or all among several suggestions or offer their own.) Following closely was customers cutting down on the number of visits, cited by 40%. Other significant factors were competition cutting into business (20%), “other” (20%), and lower extra-service income (15%).

Roughly two out of five operators (41.9%) said they raised washer and/or dryer prices in 2012.

Finally, respondents were asked how they would grade their 2012 management performance. Approximately 47% gave themselves a B, and another 27.9% gave themselves an A. Roughly 19% said they only deserved a C, while the remaining 7% were unsure.

The Wire survey presents a snapshot of readers’ viewpoints at a particular moment but it should not be considered scientific.

Subscribers to Wire e-mails—distributed twice weekly—are invited to take a brief industry survey anonymously online each month. All self-service laundry owners and operators are encouraged to participate, as a greater number of responses will help to better define operator opinions and industry trends.