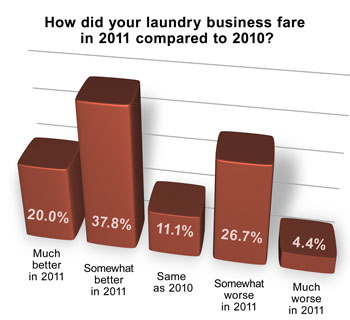 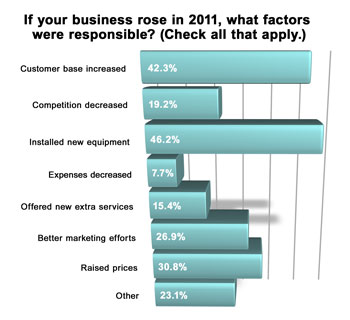 Operators whose business rose attributed it primarily to installing new equipment (46.2%), a larger customer base (42.3%) and/or raising prices (30.8%). Better marketing efforts (26.9%), decreasing competition (19.2%), offering new extra services (15.4%) and lowering expenses (7.7%) were other important factors. Some 23% pointed to “other” reasons, and most of their comments dealt with keeping stores clean and equipment in operation. (Respondents could choose any or all among several suggested factors or offer their own.)

Among respondents who said their business dropped in 2011, two-thirds (66.7%) blamed the decline on customers cutting down on the number of visits. Other significant causes were a decreasing customer base (61.9%) and rising expenses (52.4%). Also cited were “other” (19%), lower extra-service income (14.3%), and competitors cutting into their business (9.5%).

Two out of five operators said they raised washer and/or dryer prices in 2011.

The Wire survey presents a snapshot of readers’ viewpoints at a particular moment, but it should not be considered scientific.

Subscribers to Wire e-mails—distributed twice weekly—are invited to take a brief industry survey anonymously online each month. All self-service laundry owners and operators are encouraged to participate, as a greater number of responses will help to better define operator opinions and industry trends.