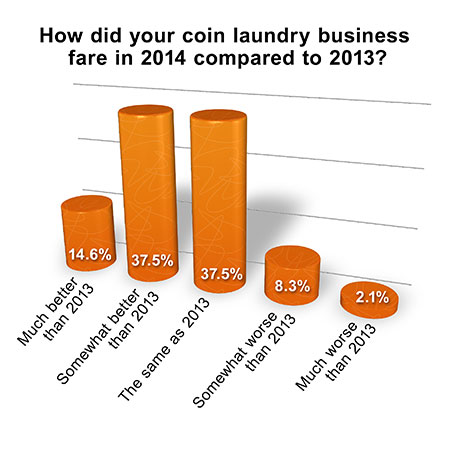 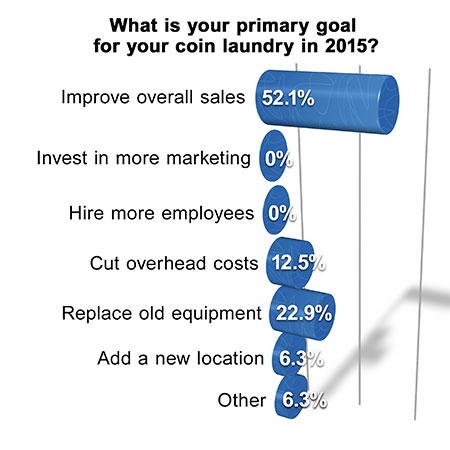 CHICAGO — Better than one-third of coin laundry operators polled (37.5%) reports that 2014 business was “somewhat better than 2013,” according to results of this month’s American Coin-Op Your Views survey.

“Rising utilities cost” was the most challenging problem the majority (41.7%) of operators faced this year, while 27.1% were most challenged by “equipment breakdowns.”

Equal shares of 6.3% found “declining sales,” “competition moving in” and “employee management issues” problematic in 2014, while 12.5% of respondents faced “other” difficulties.

Despite these hurdles, more than half of respondents are forging on toward 2015, saying that “[improving] overall sales” is their top priority for the new year. Close to 23% would like to “replace old equipment,” while 12.5% are focused on “[cutting] overhead costs” in 2015.

Equal shares of 6.3% are interested in “[adding] a new location,” or “other” ventures for the new year. No one who took the survey identified their top priority as “[investing] in more marketing” or “[hiring] more employees.”

Close to 43% of respondents believe that it is “somewhat probable” that they will accomplish their goals for 2015, while 40.4% say that it is “highly probable.”

“Debt is something that will strangle your business,” says one respondent, regarding a major lesson he/she learned this year. “No matter how you slice it, the borrower is slave to the lender. This continues to haunt me and, as a result, we are more committed than ever to be debt-free as fast as humanly possible.”

“Don't pay attention to the negativity in the [business], plow ahead, do one thing extra per day, and keep a positive attitude, it will all work out,” says another respondent. “In short, stay positive.”

Regarding his/her outlook for the upcoming new year, one respondent says, “2015 should be a fantastic year. I will need to add a third shift to keep up with the demand at some point. My main competition in my town is building another self-service, unattended store, and my sales have continued to improve.”

“I am optimistic that sales will increase by at least 5%, because we are a hands-on operation and do all the little things that are necessary to improve our business and keep ahead of our competition,” says another.

“If markets improve in my area, I would like to sell and retire,” adds another respondent.

American Coin-Op’s Your Views survey presents an unscientific snapshot of the trade audience’s viewpoints at a particular moment; due to rounding, percentages may not add up to 100%.