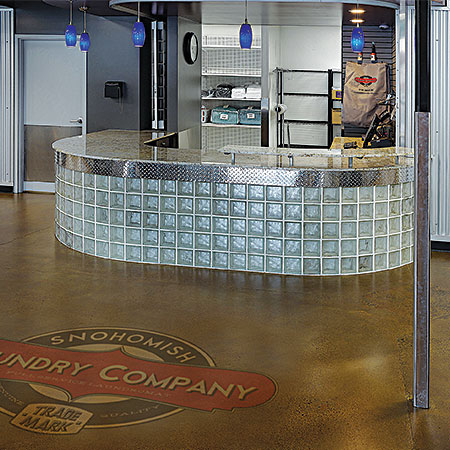 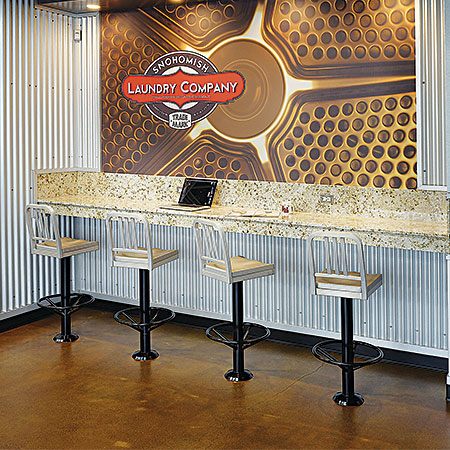 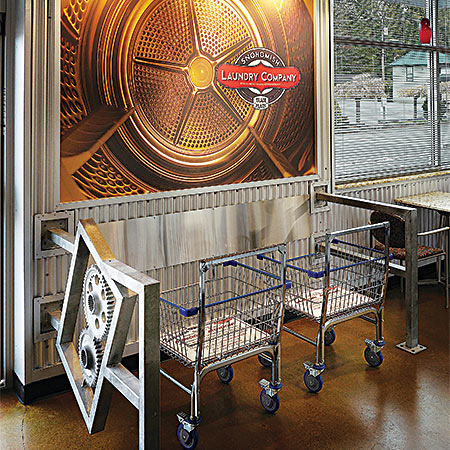 The brand-new Laundromat is actually the reincarnation of a laundry of the same name previously located in Snohomish Square on Avenue D for the past eight years. The popular original store outgrew its space and was relocated to a building offering more than double the space a little over a mile away, allowing for additional amenities to provide an even better customer experience. Plus, there is plenty of on-premise parking.

Centrally located within walking distance to shopping and restaurants, and across from City Hall, Snohomish Laundry has a striking storefront that beckons passersby to stop in and take a closer look.

If the designers wanted customers to feel like they were walking into a chic, local cafe rather than a Laundromat, they succeeded.

An attractive store with amenities and value-added services wouldn’t be enough to entice customers to return week after week if there weren’t high-quality, user-friendly commercial laundry machines that work.

The 5,000-square-foot spacious interior provides plenty of space for the latest top-rated Dexter laundry equipment. WSD-supplied Dexter laundry machines are not only easy to use and durable over the long run, they are also energy-efficient, the owners says. Important for the environment, energy-efficient laundry machines also allow vended laundry owners and operators to save on utility costs, which directly affects the bottom line.

Tod Johnson originally decided upon Dexter Laundry equipment after doing research in preparation for opening Tolt Laundry Co. in 2007. The equipment worked out so well for him that the family team installed it in its other two Laundromats a few years later.

“At this point, Dexter Laundry equipment has become part of our DNA,” quips Jay Johnson. “Dexter is like the Cadillac or Caterpillar of the commercial laundry industry. It’s outstanding equipment that is well worth the price. It’s not only reliable, it is durable and is very user-friendly.”

The Johnsons optimize use and maintenance of the equipment by regularly attending WSD’s Dexter service seminars.

Upon entering Snohomish Laundry, it becomes clear the owners paid close attention to details during design and construction of the space.

For starters, it was designed to feel open, airy and spacious. The seating is arranged such that there are quiet areas away from the TVs for those who might be trying to sit quietly or get some work done while they wait for their laundry. And the TVs were set up with speakers in the ceiling pointed down at the nearby seats so that the sound wouldn’t blare throughout the Laundromat. Corrugated steel wall surfaces also diffract sound from bouncing, reducing noise clutter while also holding up to standard wear and tear.

Managing potential problems during those hours when the Laundromat is unattended is always a challenge. The owners addressed this with the careful design of a high-definition camera video system with audio public-address capability. Using 23 cameras, every inch of the public area has video/audio coverage, including the parking lot. Additionally, automatic entry doors are programmed to unlock the facility at 7 a.m. (two hours before an employee arrives) and lock the facility after 10 p.m.

Another nice detail is the arrangement of folding tables and carts. The first thing a visitor might notice is the carts aren’t scattered all around and in the way! They fit neatly under the folding tables, which Tod Johnson modified in his garage because the owners couldn’t find any in the commercial marketplace that were just the right height for their purposes. The folding tables were fabricated with hanging racks, enabling removal of racks on the carts so they can be easily stowed away while not in use.

There was only a brief lag in business while Snohomish Laundry shut down for the move. As early as six months prior to relocating, ownership started letting customers know what was going on. Even after they shut the doors at the old store and moved the equipment out, they had employees remain behind to inform any customers who happened by what was going on.

As a consolation, the employees handed out coupons for discounted wash at Monroe Laundry 8 miles away. The coupons featured a map showing the new location of the Snohomish Laundry.

Of the new store, Jay Johnson says, “When you have been in the Laundromat business for eight years, you see all the mistakes you would like to correct when you have the chance.

“Scott pushed, pulled and shoehorned an incredible level of detail into the finished product,” he adds. “I guess we succeeded, because within two weeks of opening our new store, our volume of customers is back up to what it was in the old space and continues to grow.”

If you missed Part I, you can read it HERE.