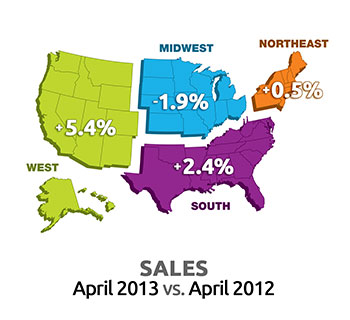 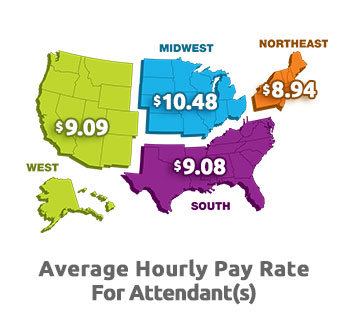 Highest average hourly pay rate for attendants is in Midwest: $10.48

CHICAGO — The West posted the strongest gain in coin laundry sales for April, while the average hourly attendant pay rate reported in the Midwest has risen by nearly $2 from one year earlier, according to data from AmericanCoinOp.com’s latest StatShot unscientific survey.

April sales in the West rose 5.4% from April 2012. While only a small sample of operators explained that market conditions in the West are “getting worse,” the majority see things improving. They attributed this to a variety of factors, including an improved economy, more tourism, and other industries (such as oil drilling) growing in the area.

Sales in the South were up 2.4% from last April, while the Northeast saw a minimal 0.5% increase in month-to-month sales. Despite the slight increase, operators in the South are seeing little to no improvement in market conditions.

“[The] cause is lack of young men [who mainly work] on the tree farms,” comments one operator in the region. “People are moving out of the neighborhood,” writes another.

Meanwhile, some operators in the Northeast are singing the same tune, plus note an increase in competition. “The population has decreased in the area,” writes one. “Three Laundromats changed hands and dropped prices, and another two new Laundromats opened.”

But one operator painted a more optimistic picture, saying conditions are “steady, which is an improvement over the last two years in which they were declining.” The job market is steadily improving, the operator added.

The Midwest was the only region to post lower sales, down 1.9% from last April. Some operators are reporting an improving market, but the majority are not seeing the same results.

“The market has changed very little in the last decade,” writes one operator. “[There is] barely enough business in the town for our single 1,000-square-foot Laundromat. Another laundry opened [and] took about half [of] our business.”

The average hourly pay rate for attendants in the South also rose. It was $8.38 this time last year, but is now $9.08, according to the survey data. The reported pay rates in the region range from $7.25 to $13 an hour.

Audience members are invited via e-mail to participate in these unscientific surveys, which are conducted online via a partner website. Self-service laundry operators are encouraged to participate, as a greater number of responses will help to better define industry trends.