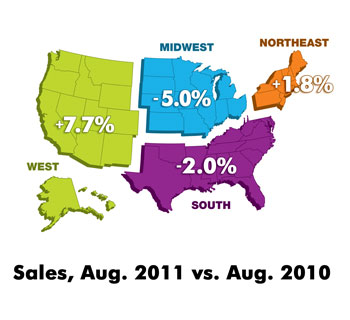 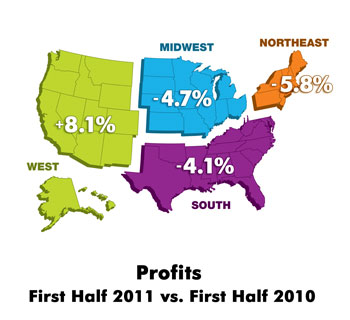 CHICAGO – The West is the only region that reported increased August sales from one year ago and greater profits for the first half of 2011, according to the latest AmericanCoinOp.com StatShot survey.

Self-service laundry operators in the West reported August sales were up 7.7% compared to August 2010, and that their first-half profits were up 8.1% compared to the first half of 2010.

In the Northeast, August 2011 sales were up 1.8% from the previous August while first-half profits for this year were down 5.8% compared to the first six months of 2010.

Even with things looking good, the Western operators who offered comments still leaned toward the negative. “Utilities are increasing anywhere from 3.5% in one town to more than double in another!” says one. “Only frequent, non-quarter-increment price increases will keep operators afloat long term in this market.”

“Cost is going up, and everything else is going downhill,” remarked a Northeastern operator.

In the South, “(our) second-quarter sales were down 4.5% compared to first-quarter sales due primarily to higher gasoline prices,” says one operator. Another says their municipality’s water rates “literally doubled” beginning in August.

In the struggling Midwest, which has failed to make it into positive territory in sales all year, one operator reports having taken a number of steps to turn a profit.

“We implemented many new ways (to) cut the cost of doing business. We installed a new hot water heater, added insulation, (and) dropped the landline phone and added a cell to our existing cell phone contract and kept the same number. Garbage is picked up [every other week] rather than weekly without any problem with overflow. … Income was down but because of the cost-cutting measures, our profit was up a bit.”

Audience members are invited to participate in these unscientific surveys, which are conducted online via a partner website, on a regular basis. All self-service laundry operators are encouraged to participate, as a greater number of responses will help to better define industry trends.