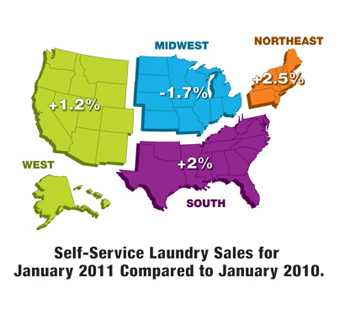 CHICAGO — Although winter storms hurt business, operators in three out of the four regions reported small sales increases in January, according to the most recent AmericanCoinOp.com unscientific StatShot survey. In last month’s survey, reflecting December activity, three out of four regions also reported small sales increases.January sales in the Northeast (compared to January 2010 sales) were up 2.5%. Several operators reported increases of 10% or larger.While Northeastern operators complained that snowstorms put a crimp in business, a good number of them continued to see a slow, but steady, rise in sales.Midwestern operators experienced a 1.7% sales decrease in January, citing a variety of reasons for the weak numbers, including inclement weather and their fear of raising prices in a still-slumping economy.It may have even been a bit tougher for Midwestern operators than the numbers indicate. Only a small percentage of operators reported a business increase, however, healthy sales increases at these stores helped offset small business decreases at a much larger number of stores.Southern operators saw sales jump 2% in January. There was nearly an equal split between operators experiencing sales increases and decreases.Weather influenced Southern sales, but a good number of operators credited changes, such as paring costs and remodeling, as the reason for being able to turn out a modest bump in sales.Western operators saw sales increase 1.2%. The Western business climate was just the opposite of the Midwest situation. A larger number of operators had a modest increase in business, while fewer operators reported larger sales decreases.Respondents were also asked about their 2010 overall sales (compared to 2009 sales). Operators in three out of the four regions saw sales fall.Southern operators said 2010 sales were down 4%, and Midwestern operators saw sales decrease 3.7%.Western operators experienced a 2% drop in sales, while Northeastern operators had a 2.2% sales increase even though more operators had a business decrease in 2010. Several Northeastern operators reported healthy increases in 2010.AmericanCoinOp.com’s StatShot includes information on sales, wages, costs or other financial data based on anonymous survey information provided by industry owners and operators.Audience members are invited to participate in these unscientific surveys, which are conducted online via a partner website, on a regular basis. Self-service laundry operators are encouraged to participate, as a greater number of responses will help to better define industry trends.