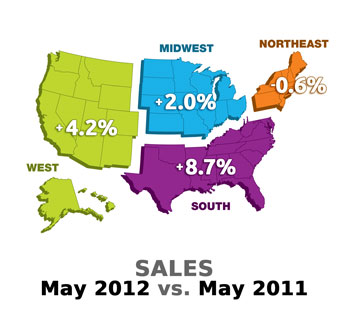 CHICAGO — Operators in three of the four regions reported May sales increases compared to the prior year, led by the South’s 8.7% gains, according to this month’s unscientific AmericanCoinOp.com StatShot survey. Nationally, operators saw monthly sales rise 2.5% compared to May 2011.

The West saw sales rise 4.2%, the second straight month of gains there. May-to-May sales in the Midwest were up 2%. The Northeast was the only region to report a business slowdown, with monthly sales falling 0.6% from the previous May.

As we near the halfway mark of the year, sales have increased in at least three regions every month during 2012.

“We’ve had the best five-month start ever,” raves an operator from the West, while another says “oil drilling has had a great impact on (our) current year sales increase.”

“Monthly gross income has been relatively stable for over a decade,” says an operator from the Midwest. “Raising prices doesn’t seem to affect income.”