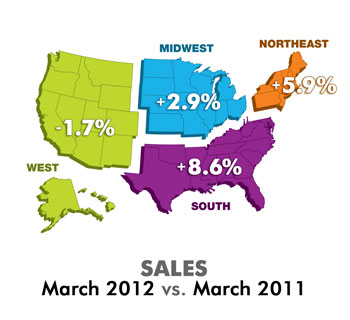 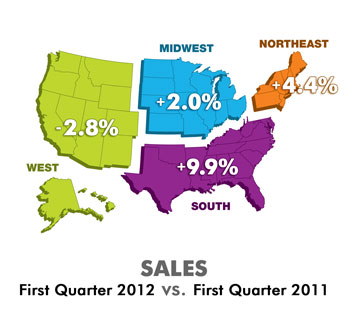 CHICAGO — March sales in three of the four regions were up, according to the most recent AmericanCoinOp.com StatShot unscientific survey. Results for the first quarter were somewhat similar to the March sales results.

Self-service laundry operators in the South reported the largest collective increases—8.6% for March 2012 compared to March 2011 and 9.9% for first-quarter 2012 compared to the same period last year. “Better” was the word that kept popping up in comments offered by operators from that region.

“Our word of mouth continues to grow and we’re more aggressive in building commercial accounts,” says one. But not everyone is experiencing improvement. “Not seeing much change. Still weighing my options on what to do. Utility costs are killing me.”

In the Northeast, March year-to-year sales were up 5.9%, while quarter-to-quarter sales rose 4.4%, yet most of the comments received were somewhat gloomy.

“The market appears to be somewhat worse,” wrote one Northeast operator. “I’m trying to maintain the quality of my operation despite the downward trend.” Another said things were getting worse because of increasing gas prices.

Operators in the Midwest saw March sales rise 2.9% while first-quarter sales were 2% higher than first-quarter 2011. Several respondents said they thought conditions in their region were getting better.

The West was the only region to see sales drop. March 2012 sales fell 1.7% from the prior March, and first-quarter sales were down 2.8% compared to the same three-month period last year. Most operators who commented said their market conditions were unchanged or were getting worse. Again, gas prices were mentioned several times.

Audience members are invited to participate in these unscientific surveys, which are conducted online via a partner website. Self-service laundry operators are encouraged to participate, as a greater number of responses will help to better define industry trends.