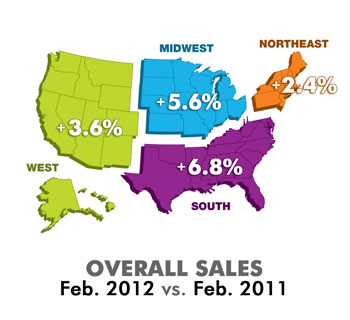 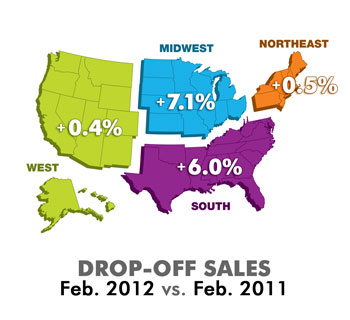 CHICAGO — Self-service laundry sales were up in all four regions for a second straight month in February, according to the most recent AmericanCoinOp.com StatShot unscientific survey.

February sales in the South were up 6.8% (compared to February 2011 sales). Sixty percent of the respondents reported an increase in sales, while 20% reported a decrease. Sales were unchanged for 20% of respondents.

Sales in the Midwest rose 5.6% compared to February 2011 sales. Roughly 64% reported year-to-year sales increases, while 14.3% reported decreases. Sales were unchanged for 21.4% of respondents.

“My customer count is up 15% over last February,” a Midwest operator reported.

In the West, February sales were up 3.6%. Fifty-five percent of respondents reported a bump. “Coin sales very spotty,” reports an operator there. “Have added credit card readers to one-third of the Laundromat, which resulted in better results.”

February sales were up 2.4% in the Northeast, where 57% of respondents reported increases.

Despite the rise in sales overall, many operators offered gloomy comments. Some said their local markets are suffering because of the economy.

Respondents were also asked about drop-off-service sales for February (compared to February 2011). Every region reported sales were up, but there was quite a bit of difference in two of the regions compared to the others.

Southern operators saw their drop-off-service sales rise 6% in February from the previous year. Eighty percent of the respondents have offered this extra-profit service for at least two years.

“We ran a great promo in February that really boosted drop-off,” adds another. “Drop-off is thegrowth segment for our business.”