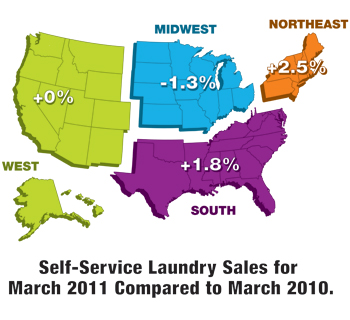 CHICAGO — March sales in two of the four regions were up slightly, according to the most recent AmericanCoinOp.com StatShot unscientific survey. Quarterly sales results were somewhat similar to the March sales results.

March sales were unchanged (compared to March 2010) in the West. February sales were down 4.8% in the region.

There were some positive comments by Western operators. Several report seeing new stores open, and one operator believes his area will once again support price increases.

Sales were down 1.3% in the Midwest. A handful of operators reported large (10% or greater) increases and decreases.

Midwestern operators offered a host of comments about sales conditions. Some cited improving conditions, while others lamented the still-struggling economy. Several operators say rising gasoline prices are affecting their customer base — some customers aren’t making the long drive to their stores. One operator believes “there is no rhyme or reason” to the area’s business ups and downs.

Northeastern sales inched up 2.5%, after being down slightly (-1.7%) in February. While the sales gain was modest, slightly more than 60% of operators experienced a sales boost.

Sales were also up in the South (1.8%), marking consecutive positive sales months. February sales were up 2.7%.

First-quarter sales increased 1.5% in the Northeast, and were unchanged (from 2010) in the South.