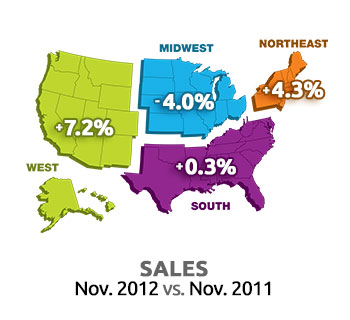 CHICAGO — Self-service laundry sales were largely positive in November, with three regions reporting increases, according to the most recent AmericanCoinOp.com unscientific StatShot survey.

November sales in the West were up 7.2% from November 2011. “Had a competitor temporarily shut down for repairs for several weeks, so that had some positive impact on my sales,” reports one owner from the region.

The Northeast reported November sales increased 4.3% from the prior November, due in part to Hurricane Sandy and its impact on the region, according to some operators.

In the South, year-to-year sales increased 0.3% in November. One store owner reports that his/her water and sewer rates have increased.

The Midwest was the only region to see sales decline—4.0%—for November. “Costs are going up. I have run out of ideas how to be more energy-efficient. I’ll have to raise my prices,” reports a store owner there.

Respondents were also asked about November 2012 front-loader prices — their lowest prices, highest prices, and whether the prices had changed since the previous November. The lowest and highest prices varied quite a bit.

In the West, customers can get a front-load wash for as little as $1.50. The lowest-priced front-load washes range from $1.50 to $6. Half of respondents report their lowest front-load wash price is higher than a year earlier, and the other half say they are unchanged.

The price range for the most expensive front-load washes in the Western region is $4.75 to $15—the broadest range among any of the regions. Half of respondents report their highest front-load wash price is higher than a year ago, and the other half say they are unchanged.

In the Northeast, the most inexpensive front-load prices are $2 to $3.50. Just 30% of operators has raised their prices in the last year, while the remainder has kept the prices unchanged.

When it comes to the most expensive wash, Northeastern customers are paying $4 to $7.75. Forty percent of operators has raised this price compared to November 2011, while the remainder has stood pat.

Low-end front-load prices in the South range from $2 to $2.50. Three-quarters of respondents has kept the same low price since November 2011, and the remaining one-quarter has raised the price.

The price range for the most expensive front-load washes in the South is $3.50 to $8. The breakdown of where the prices are today compared to a year ago is identical to the low-end figures.

The most inexpensive front-load prices in the Midwest range from $1.75 to $2.50. Approximately 38% of operators raised prices in the last year, while the remainder has kept prices unchanged.

When it comes to the high side of front-load prices, Midwestern customers face a range of $4 to $8. Some 13% of respondents has increased prices, with the remainder keeping the status quo.

The Author did not state the size of these front load washers.  Are these single, triple, 50 lbs or what??  If there is no specific on the size of the washer, how can this even be measured??  If you pay $6 for a triple load frontload washer, then obviously a single load washer will be $2.  Give us more specifics on size of the machines surveyed and then this information will be helpful. As of now it really doesnt mean anything. Thanks

Your listing of front load price ranges means nothing unless you differentiate the size of machines.  For instance for my f/l machines I have the following price ranges because of pricing for hot, warm and cold.

It would be very helpful to have the vend pricing broken down by sizes of washers (18lb., 20lb., 30lb., etc). Also many newer laundromats have washers that offer multivend pricing (extra for hot water, extra rinses, etc.), not sure if you have ability to segregate these but eventually most laundries will have this multi-vend capability.