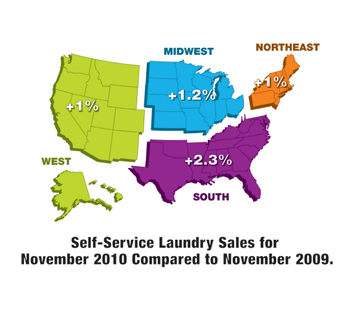 CHICAGO — It took until December, but for the first time this year, all four regions reported a monthly sales increase (November sales compared to November 2009 sales), according to the most recent AmericanCoinOp.com unscientific StatShot survey.November sales in the West were up 1%. Forty percent of the operators experienced an increase in sales, several of them double-digit increases. A growing number of operators described the business climate as “slow, but steady.”Sales rose 2.3% in the South, with a small group of operators reporting sales bumps of more than 15%. About half of the operators had a sales increase.It was a mixed bag when it came to some of the comments from Southern operators. Several are still trying to deal with a lack of transitional workers and a diminishing Hispanic base. Some were optimistic after they completed recent equipment upgrades. One operator said the rising cost of water would become the industry’s main challenge.Northeastern operators had a 1% increase in sales. While business stabilized for a host of operators, a growing number are lamenting decreasing drop-off service and commercial-account revenue.Sales rose 1.2% in the Midwest. Slightly more than half of the operators had an increase in sales. The tone of their comments can best be described as “cautiously optimistic.”Respondents were also asked about front-loader prices — their lowest prices, highest prices and whether the prices had changed since November 2009. The lowest and highest prices varied quite a bit.In the West, customers can get a front-load wash for as little as $1.50. The lowest-priced front-load washes range from $1.50 to $4.50. Eighty percent of these prices remain unchanged from November 2009. Fifteen percent of respondents have raised their lowest-price wash in the last year, and 5% actually lowered the price.The price range for the most expensive front-load washes in the Western region is $1.75 to $12.50. For 85% of respondents, these prices have been in place since November 2009. Fifteen percent have raised prices in the last year.Low-end front-load prices in the South range from $1.25 to $3.50. Eighty-two percent of respondents have kept the same low price since November 2009, and 18% have raised the price.Southern customers are looking at a wide range of prices when it comes to the most expensive front-load prices — $2 to $9.50. Again, 82% of operators have kept the same low price and 18% have raised the price in the last year.In the Northeast, the most inexpensive front-load prices are $1 to $3. Twenty-three percent have raised their price in the last year, while 8% have lowered the price. Sixty-nine percent have maintained the same price.When it comes to the most expensive wash, Northeastern customers are paying $3 to $12.50. Twenty-nine percent have raised the price of their most expensive wash in the last year. Seven percent have lowered the price, and 64% have kept the same price.The most inexpensive front-load prices range from $1.25 to $4.50 in the Midwest. Eighty-four percent have held this price for the last year, and 16% have raised the price.When it comes to the high side of front-load prices, Midwestern customers face the widest price range of all regions — $1.75 to $13.29. Just as with the most inexpensive prices, 84% of respondents have held this price for the last year, with 16% having raised prices during the last year.AmericanCoinOp.com’s StatShot includes information on sales, wages, costs or other financial data based on anonymous survey information provided by industry owners and operators.Audience members are invited to participate in these unscientific surveys, which are conducted online via a partner website, on a regular basis. Self-service laundry operators are encouraged to participate, as a greater number of responses will help to better define industry trends.Click here and follow the menu instructions to sign up for the free e-mail service.