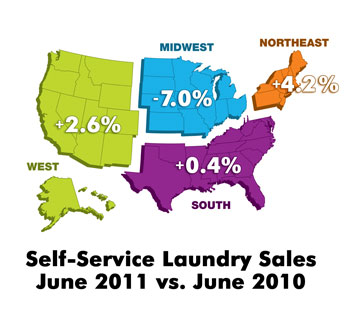 CHICAGO – Operators in three of the four U.S. regions reported June sales increases compared to the prior year, led by the Northeast’s 4.2% and West’s 2.6% gains, according to this month's unscientific AmericanCoinOp.com StatShot survey. The South saw sales rise 0.4%.

June-to-June sales in the Midwest were down 7%. Because the region’s swoon was so dramatic—nearly 73% of Midwestern operators who responded to the survey reported sales declines—sales dipped 1.4% nationally from June 2010.

Operators in the Midwest cited many different reasons for their tough times. Road construction, extreme heat/humidity, high gas prices and government regulation were among them.

But not all was negative. “Our sales are up for the year 11%,” says one Midwestern operator. “June was just a slow month.”

At the halfway mark of the year, June is the third straight month that sales have increased in three regions.

Survey respondents were also asked about their second-quarter sales. Combined sales for April, May and June were up substantially in the West (7.1%) and Northeast (6.8%) when compared to 2010 figures, while the South also posted a strong 4% gain. Quarterly sales were down 4% in the Midwest.