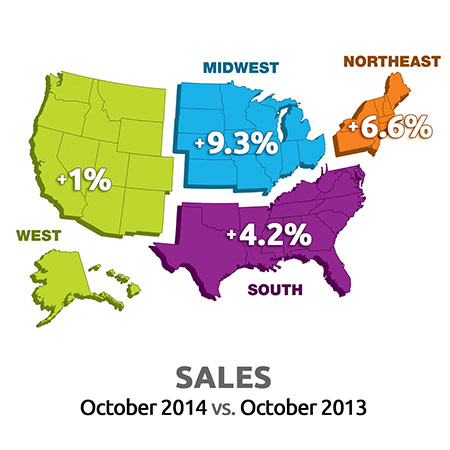 CHICAGO — Coin laundry operators in the Midwest had a strong October, as year-over-year sales in the region were up 9.3% last month, according to results from American Coin-Op’s StatShot survey.

Some in the region attribute the sales increase to oil field and pipeline work in their area, while one respondent says that he/she is seeing new customers due to a competitor closing.

Many in the Northeast are also reporting stable market conditions, as year-over-year sales in the region were up 6.6% last month.

“Seems as the gasoline prices fall, business is increasing, especially ancillary services such as wash-and-fold and dry cleaning,” says an operator there.

Store owners in the South and West also posted increases in October year-over-year sales, up 4.2% and 1.0%, respectively.

“My business is growing by leaps and bounds and [we] are having our best year in 13 years,” says a store owner from the South. “There have been two new laundries built in my town and we haven’t even noticed. There is terrific development … a mile from my store. Sam’s, Walmart, and a [shopping center] is in the works. This can’t hurt my business.”

“The harvest workers and the RV seasonal residents have left the area and slowed the business at our stores significantly,” adds another operator from the region.

Despite only posting a slight increase in October year-over-year sales, many operators in the West are reporting stable market conditions.

“Not much new competition comes in, but I survive,” says an operator there. “Over the years, four new stores were built within a mile-and-a-half radius, along with others being remodeled. Two of those new stores have changed hands at least three times. One is up for sale for the first time.”

Operators in the Midwest charged the most for their dryers, as the average price there in October was 39.9 cents for 10.1 minutes, up from 25.0 cents for 6.8 minutes in last year’s survey. Drying times today range from 5 to 30 minutes.

The current average dryer price in the South is 27.7 cents for 5.9 minutes, down roughly one cent from the average 28.4 cents for 7.2 minutes reported in October 2013. Dryer times in stores there range from 1 to 10 minutes.

Average dryer prices in the Northeast have remained consistent, as the current average price there is 27.7 cents for 7.6 minutes, compared to 27.5 cents for 7.4 minutes in October 2013. Current drying times range from 5 to 10 minutes.

Operators in the West reported the lowest current average dryer price among other regions, at 25.0 cents for 8.8 minutes, compared to 25.8 cents for 7.2 minutes in October 2013. Drying times currently range from 6 to 12 minutes.