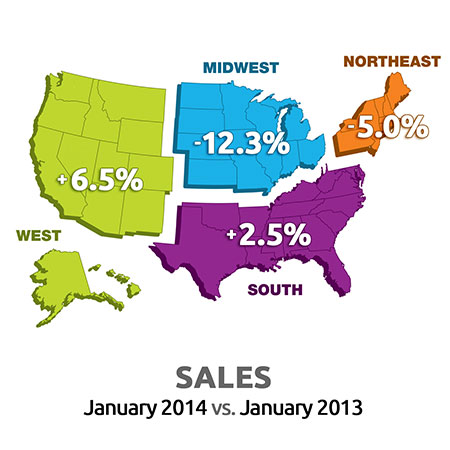 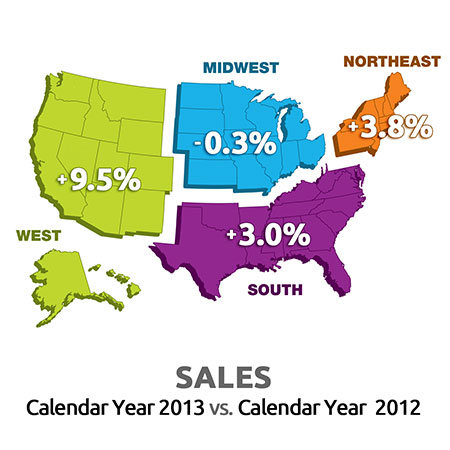 CHICAGO — Coin laundry store owners in the Midwest faced a bitterly cold January, as year-over-year sales in the region dropped 12.3%, according to results from this month’s American Coin-Op StatShot survey.

Store owners in the Northeast also faced a sales slump last month, as January sales fell an even 5% compared to last year.

Stores in the South and West fared better, as January sales were up 2.5% and 6.5%, respectively, compared to the same month last year.

“[Market conditions are] bad due to cold and snow here in the Northeast,” says a store owner from that region.

Regarding market conditions in his/her area, one store owner from the West says business is “excellent, as we are next to a new RV park, and an existing RV park is on the next street.”

Store owners in the West also reported strong sales numbers for calendar year 2013, up 9.5% compared to 2012, marking the largest annual increase among all regions.

Store owners in the Northeast and South also reported sales increases for the year, up 3.8% and 3.0%, respectively. Annual sales in the Midwest dipped 0.3% from 2012.

“There are two more laundries in my area, so the pie is cut into smaller pieces,” says a store owner in the Midwest. “[We are] still making money, but working more hours to minimize payroll.”

“Average [spending] per customer is growing, but the total number of customers is shrinking as they relocate or lose government assistance,” says a Northeast store owner.

“Market conditions are better, generally, but the Clean Water Act is forcing major increases in water/sewage charges,” says a store owner from the South.