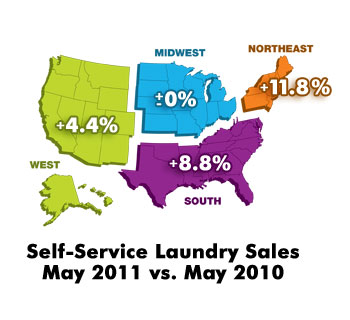 CHICAGO – Operators in three of the four regions reported May sales increases compared to the prior year, led by the Northeast’s 11.8% and South’s 8.8% gains, according to the most recent unscientific AmericanCoinOp.com StatShot survey.

The West saw sales rise 4.4%, the second straight month of gains there. May-to-May sales in the Midwest were flat, which could be considered good news since the region had seen its sales in the red every month this year.

In the Northeast, where two-thirds of respondents reported gains, a competitor’s store closing benefited the bottom line for at least one operator.

Another storeowner says “June has backed off some, but (is) still ahead of 2010.”

In the South, only one-third of operators reported higher sales, but their gains were significant. One operator says severe storms that displaced families meant more business. “Terrible tornadoes in April have done more to help our economy than any stimulus package could ever hope to do.”

As we near the halfway mark of the year, May is the second straight month and the third this year (January) that sales have increased in three regions.

Subscribers to AmericanCoinOp.com’s Wire e-mails are invited to participate in these unscientific surveys, which are conducted online via a partner website and only take a few minutes to complete.