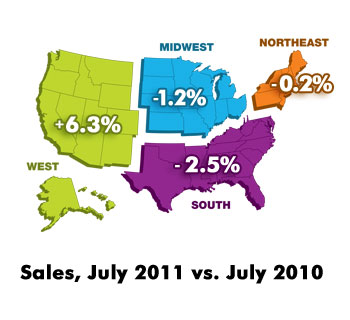 CHICAGO – Self-service laundry operators in three of the four regions reported their sales declined in July, traditionally one of the weakest revenue-generating months of the year, according to the most recent AmericanCoinOp.com StatShot survey.

In the South, month-to-month sales fell a collective 2.5%. More operators reported sales increases than not, but the double-digit losses incurred by the minority outpaced smaller gains elsewhere.

July-to-July sales in the Midwest were down 1.2%. In the Northeast, they were virtually flat—down only 0.2%.

How did some operators keep their costs down? By repairing or updating equipment such as washers, dryers and water heaters. One operator reported installing a white insulated roof.

Some operators in the West credit cleanliness and a friendly atmosphere for helping them maintain their efficiency.

Meanwhile, one Northeast operator who reported their July-to-July sales were unchanged says that theft makes it difficult to run a laundry efficiently. “Attendant stealing is at an all-time high,” the respondent wrote. “Much of the money is missing from the inside.”

Subscribers to AmericanCoinOp.com’s Wire e-mails are invited to participate in these unscientific surveys, which are conducted online via a partner website and only take a few minutes to complete.