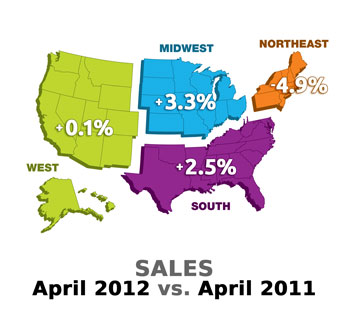 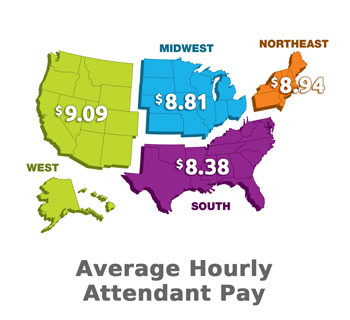 CHICAGO — April sales were up in three of the four regions, according to the most recent AmericanCoinOp.com StatShot unscientific survey. Attendant wages are also fairly consistent across the United States, with the average pay ranging between $8.25 and $9.25.

April sales rose 3.3% in the Midwest (compared to April 2011). Only 10% of the respondents reported a decrease in sales. Despite the results, comments from several Midwest operators were only cautiously optimistic.

“We are in Michigan and we were hit hard,” adds another. “It has stopped getting worse, but (business is) not growing very fast, if at all.”

Southern self-service laundry sales were up 2.5% in April from the previous April.

“Lots of construction people dropping off laundry,” says one operator located in a region that suffered tornado damage last year. “Most will be here at least two years. Average wash and dry customers (are) still finding other ways of getting their laundry done without coming to the Laundromat.”

An operator attributed last month’s performance to students, while another said it was due to the area’s strong Hispanic population.

April’s numbers were virtually flat in the West, where sales increased 0.1%. A greater share of operators experienced sales increases, but those who saw their sales fall offset the pluses with more significant decreases. Many operators in the region say they are seeing a slow recovery buoyed by gas prices coming down.

Operators in the Northeast had a tough April, with sales falling nearly 5% for the month. Twice as many owners reported sales decreases as increases; several operators suffered double-digit declines. As you might expect, reports from the area were less than stellar.

“(There is) a slow erosion of Hispanic population due to economic conditions,” says one operator. “Competition fierce with everyone struggling for every last customer.”

“Too many mats are charging very low prices and not making a profit,” adds another.

But there were some positive assessments tied to the increased presence of construction workers and refinery workers.

StatShot respondents were also asked about attendant wages. Attendants in the West have the highest average hourly wage ($9.09); this region also had the highest wage this time last year ($8.87). Next highest is the Northeast ($8.94), followed by the Midwest ($8.81). The average hourly wage for attendants in the South is well behind the others, at $8.38.

In the South, the hourly wage range is $7 to $10. The low-end wage in the Midwest is $7.70, with the top-end wage being $10. Attendants in the Northeast have the largest pay range: $7 to $11 per hour. In the West, attendants are paid at least $8 per hour, the survey results show. The top-end wage there is $11, and at least one-third of attendants make at least $10 an hour.

Audience members are invited via e-mail to participate in these unscientific surveys, which are conducted online via a partner website. Self-service laundry operators are encouraged to participate, as a greater number of responses will help to better define industry trends.

Now add to the average wage our contribution of payroll taxes and, if you let your employees do their laundry for free, you get the true picture of their hourly wage. A good guess, if your employee uses $12.00 a week of retail washing and drying, would be an added $1.00 per hour for a 20 hour week and 50 cents per hour for a full timer.Now we get to out true payroll costs.