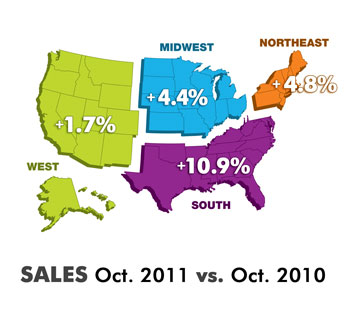 CHICAGO – Every region posted sales increases in October, with the South leading the charge with an impressive 10.9% boost, according to the latest AmericanCoinOp.com StatShot survey. Nearly all of the Southern operators who provided data reported enjoying double-digit gains for the month compared to October 2010.

One Southern operator reports that wildfires burned 1,500 houses in their area, which could account for increased patronage. Another says October sales were up 10% primarily due to increasing wash prices.

A Western operator says business is “a little slow, but improving,” while another beams about having had “our best month in 15 years.”

In the Northeast, one operator had already surpassed 2010 sales with two months to go. Another complained about stores being built too close together. “Competition hurts us all when they build new stores close to the existing ones. New stores should be built in new neighborhoods where there are no other Laundromats.”

Operators were also asked to compare current dryer prices to October 2010 prices. In cases where operators have multiple prices, they were to list the lowest price.

In 2010, dryer prices in the South were 36.6 cents for an average of 7.9 minutes, with times ranging from 5 to 20 minutes. The average price has increased to 38 cents but for a longer average of 9 minutes.

Audience members are invited to participate in these unscientific surveys, which are conducted online via a partner website. All self-service laundry operators are encouraged to participate, as a greater number of responses will help to better define industry trends.