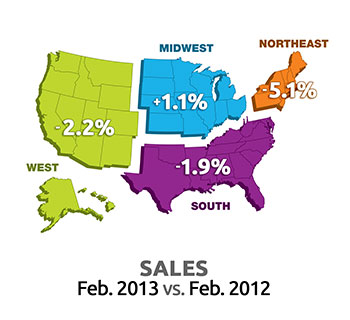 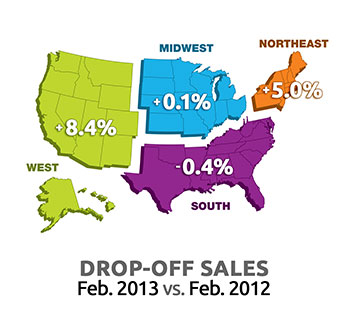 CHICAGO — Coin laundry sales were down overall in three of the four regions in February, according to the most recent AmericanCoinOp.com StatShot unscientific survey, but drop-off sales were up in three of four.

“Bad weather really hurt, as we had some weekends that people could not get out,” says a store owner from the Midwest.

Survey takers were asked to use one word to describe the market conditions in their area. Some of the responses included “better,” “decent,” “rising,” “deplorable,” “weak” and “slow.”

Respondents were also asked about drop-off-service sales for February (compared to February 2012).

In the West, where 57.1% of respondents have offered drop-off service for two years or more, sales were up 8.4%. The remaining 42.9% haven’t offered this service in the past two years.

Northeastern operators saw their drop-off sales rise 5.0% in February from the previous year. There, 88% of the respondents have offered this extra-profit service for at least two years.

Drop-off sales were nearly flat in the Midwest (up 0.1%), where 57.1% of respondents have offered this service for two years or more. Roughly 14% offered drop-off last year but are not this year, and the remaining 28.6% haven’t offered drop-off service in the past two years.

In the South, the only region to see a dip in month-to-month drop-off sales (down 0.4% from February 2012), 80% of respondents have offered the extra service for two years or more. Ten percent didn’t offer drop-off last year but do now, and 10% haven’t offered it in the past two years.

Audience members are invited to participate in these unscientific surveys, which are conducted anonymously online via a partner website, on a regular basis. Self-service laundry operators are encouraged to participate, as a greater number of responses will help to better define industry trends.