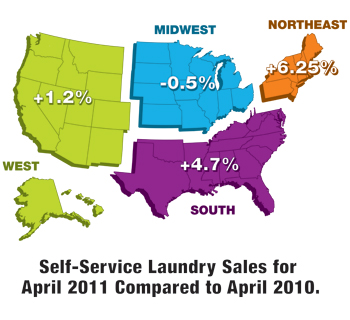 CHICAGO — April sales were up in three of the four regions, according to the most recent AmericanCoinOp.com StatShot unscientific survey. Attendant wages are also somewhat consistent across the United States, with only a small percentage of owners (13%) offering bonuses or some type of commission on drop-off work.
April sales shot up 6.25% in the Northeast (compared to April 2010). Several operators had sales gains of more than 15%, which pushed up the monthly average. Only 25% of the respondents report a decrease in sales.
Southern sales were up 4.7% in April. In March, Southern operators saw sales inch up 1.8%.
While a good number of Southern operators had positive comments about business conditions, there is still a concern about the lack of seasonal/transitional workers in the region.
April sales in the West were up a modest 1.2%. Nearly the same number of operators experienced boosts in sales as business decreases.
Despite the mixed sales results in the West, the general consensus is that business conditions are slowly improving in the area.
Sales were down a bit in the Midwest (0.5%). More so than any other region, there were a number of comments about how poor weather has impacted sales. However, one operator says, “You can’t blame everything on the weather.”
Respondents were also asked about attendant wages. Attendants in the Western region had the highest average hourly wage ($8.87), followed by attendants in the Northeast ($8.75), South ($8.40) and the Midwest ($8.25).
In the Midwest, the hourly wage scale is $6.75 to $11.50. One respondent pays $9 to $25 per hour, although it’s quite possible that the high rate is reserved for a managerial position.
The low-end wage in the West is $8, with the top-end wage being $10. No one in the West lists bonuses or commissions as part of their wage package.
Unlike other regions, about one-third of Southern attendants receive less than $8 an hour. The high-end hourly wage is $10.
The Northeast is home to the lowest hourly wage ($5). However, about 40% of Northeast attendants make at least $10 per hour.
AmericanCoinOp.com’s StatShot includes information on sales, wages, costs or other financial data based on anonymous survey information provided by industry owners and operators.
Audience members are invited to participate in these unscientific surveys, which are conducted online via a partner website, on a regular basis. Self-service laundry operators are encouraged to participate, as a greater number of responses will help to better define industry trends.