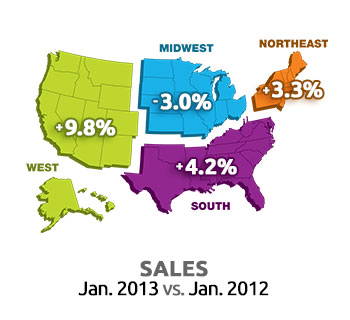 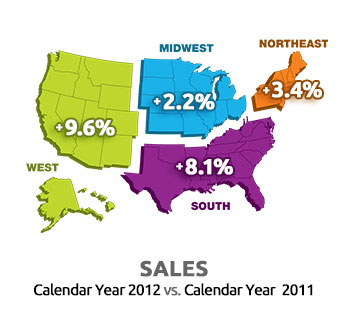 CHICAGO — Three of the four regions reported sales increases for January, championed by the West’s 9.8% boost, according to results of the latest AmericanCoinOp.com StatShot survey.

The South enjoyed the next largest upswing at 4.2%, followed closely by the Northeast at 3.3%. The Midwest was the only region to see a drop in vended laundry sales, a 3.0% decline.

The 2012 numbers were all improved when compared to 2011 results. Here, the West once again led the pack with a 9.6% year-to-year sales increase, followed closely by the South at 8.1%. Annual sales were up 3.4% in the Northeast and 2.2% in the Midwest in comparison to 2011 figures.

While the overall sales results were mostly positive, respondents’ anonymous comments about their local market conditions were more varied:

Audience members are invited to participate in these unscientific surveys, which are conducted online via a partner website. Self-service laundry operators are encouraged to participate, as a greater number of responses will help to better define industry trends.

There are also quite a few NEW laundromats opening up in the Western region. Whether they're new, or rehabs of old dumpy stores, any profit in 2012 where there was none in 2011 yields a 100%, 1000%, infinite% increase in sales on the year-to-year comparisons.