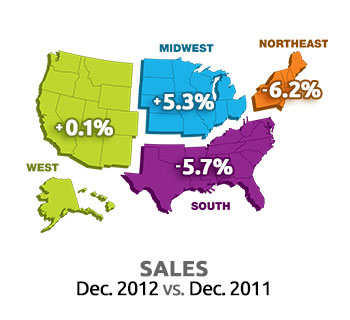 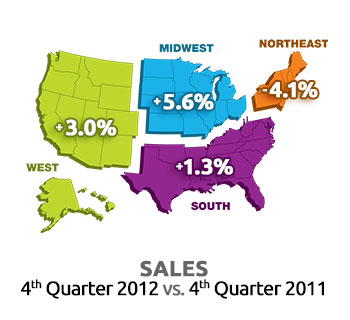 CHICAGO — Fourth-quarter 2012 self-service laundry sales rose in three of four regions despite declines across much of the nation in December, according to results of this month’s AmericanCoinOp.com anonymous, unscientific StatShot survey.

The Midwest was the big winner, with December sales up 5.3% compared to December 2011 and fourth-quarter sales up 5.6% from the prior year.

“Starting to do better,” offers one operator. Another says, “Pretty good. Apartments are full, so traffic is up!” And another: “Good, getting better.”

“Improving, (and) looking more like old times,” remarked a West store owner. But another says the area near his/her California business has suffered since the state’s prisons started releasing offenders last summer due to overcrowding.

Sales in the South were up 1.3% during the fourth quarter but down 5.7% for December. And remarks from respondents regarding current market conditions seemed to follow this dichotomy. A couple of operators called conditions there “good” or “steady,” while another says they are “dismal.”

The Northeast saw sales drops during both periods: 6.2% in December and 4.1% in the fourth quarter.

Comments such as “bad” and “slow” were fairly common, but one operator offered some hope of better things to come for the region: “For the first time in a couple of years, sales are up. A recent discussion with several other competitors seemed to indicate that sales are gradually improving in our marketplace.”