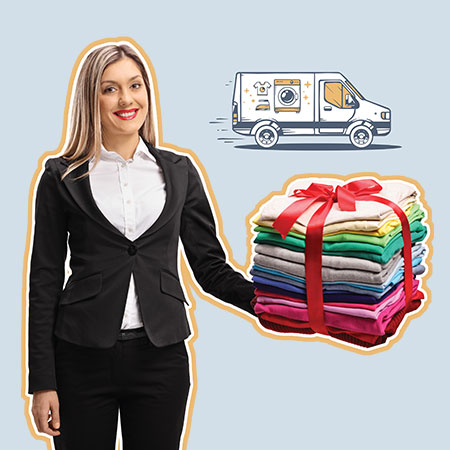 CHICAGO — In our “app-powered” economy, adding a residential pickup and delivery service expands a store’s reach, boosts turns per day and increases revenue. But just what does it take to get such a service up and running?

“Being in business for a little while at that point and having two stores when we started it, I believe we had a nice, loyal customer base,” Kasi says. “I wanted to continue that and let customers know that it was still us. … Why put it under a different name? That might confuse some customers.”

Dave Menz chose to draw a line between his Queen City Coin Laundry store brand and his Laundry Magician pickup and delivery brand in the Cincinnati area.

“I played around the idea of both. … Ultimately, we decided to separate the two because, although they’re being processed through the same facility, they are two completely different entities,” Menz says. “They’re two different businesses. And they’re marketed toward two different clienteles. I mean, there’s really nothing about them that is the same, other than it’s laundry. That’s it.”

“We definitely have the capacity to do four or five times the volume we’re doing now,” he says. “Right now, we’re only doing pickups four days a week. … We have a tremendous amount of capacity. That’s not an issue for us.”

Additionally, he’s in the process of building a fifth store that will be larger in size and capacity than his current largest store. Once it’s done, he’ll be dividing the Laundry Magician work between it and the current site.

‘ON THE RIGHT TRACK’

“One of the things we found … is that there weren’t that many people doing it,” Menz says. “Even three years ago to now, the number of people doing pickup and delivery is astronomically different. It has grown so much in a very short period of time, and that just confirms that we’re on the right track.”

Menz believes pickup and delivery will be a $5 million business in Cincinnati alone.

“Just to give you an idea … we haven’t even completed our second year of business and in delivery business alone, we’re going to reach right around the half-million-dollar mark in 2018. And that is just the tip of the iceberg.

“We launched at just the right time where society’s mentality of how they’re serviced has shifted to a point there this is normal and very acceptable.”

Miss Parts 1 or 2? You can read them HERE or HERE.