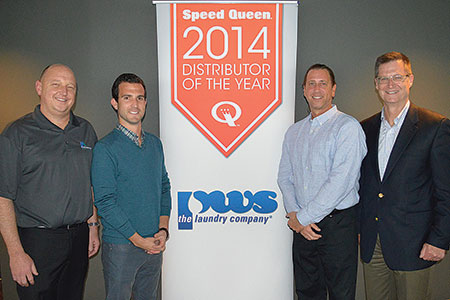 “Not only have they generated an impressive volume of sales and have a proven track record of providing outstanding customer service, but the company is renowned in the laundry industry for being the largest distributor of commercial laundry equipment in the United States,” says Bowe.

Steinberg says PWS is “honored” to have received the award, and being recognized as “best of the best.”

“Since our company was founded in 1968, we’ve been a proud distributor of the Speed Queen brand,” says Steinberg, who adds that the recognition “means a great deal.”

“For almost 50 years, Speed Queen and PWS have been great partners,” says Pollack. “Speed Queen’s products, support and financing have been invaluable to help our customers achieve optimum profitability for the Laundromats they operate.”

Headquartered in Los Angeles, with satellite offices in Northern California and San Diego, PWS distributes equipment and parts, and is considered by Speed Queen as “the leading builder and broker of Laundromats” in the United States.

“PWS has had a well-established business relationship with Speed Queen for decades,” says Bowe. “After 47 years, PWS continues to be an incredible ambassador to the commercial laundry industry. The staff at PWS are reliable, knowledgeable and dedicated, and we are proud of our partnership with them.”