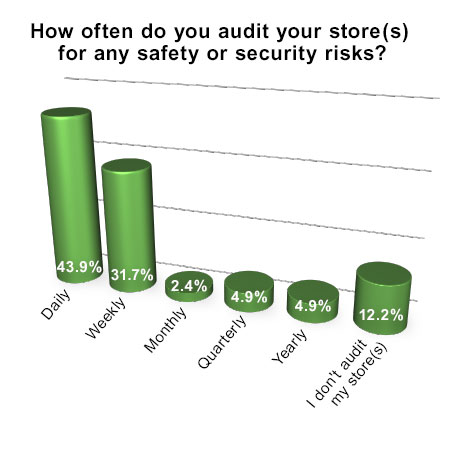 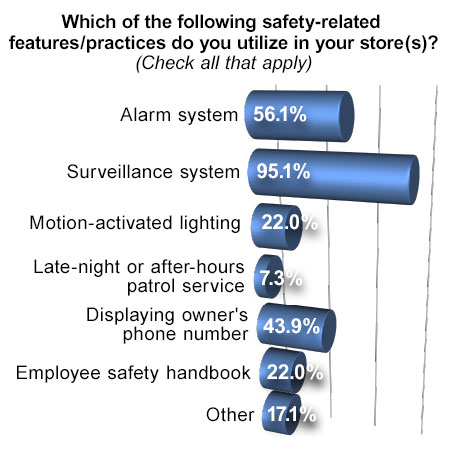 CHICAGO — Inspecting or auditing a self-service laundry for safety or security risks is common practice among the majority of store owners and operators polled in this month’s American Coin-Op Your Views survey.

Roughly 44% of respondents audit their vended laundry store daily for safety or security risks, while another 31.7% say they do it weekly. Much smaller shares check their stores monthly (2.4%), quarterly (4.9%) or yearly (4.9%).

The remaining 12.2% of respondents say they “don’t audit [their] store(s)” for safety or security risks.

Having an attendant on site can help ensure a store remains safe, says a majority of respondents (85.4%). Roughly 7% say no to that notion, and the remaining 7.3% are unsure about an attendant’s impact on store safety.

“Having an attendant on duty is the best way to ensure safety,” writes one respondent. “Our customers (especially females) are appreciative of our attendants and our lighting during the evening hours.”

“Having an attendant on high-traffic hours is the most effective strategy to minimize accidents,” adds another.

Surveillance systems is by far the most popular safety feature/practice used by the majority of owners and operators (95.1%) in their stores. Others include alarm systems (56.1%), “displaying [the store owner’s] phone number” (43.9%), motion-activated lighting (22.0%), an employee safety handbook (22.0%), and a late-night or after-hours patrol service (7.3%), according to the survey results.

Among features or practices outside those suggested by the survey, 17.1% of respondents listed things such as “hidden weapons,” “24-hour lighting inside and out,” and a store design “where there is no place to hide.”

Has an unsafe situation ever developed in your store? How did you or your staff handle it? Here are a few described by our respondents:

While American Coin-Op’s Your Views survey presents a snapshot of the trade audience’s viewpoints, its findings should not be considered scientific. Qualified subscribers to American Coin-Op e-mails are invited to participate anonymously in an industry survey.