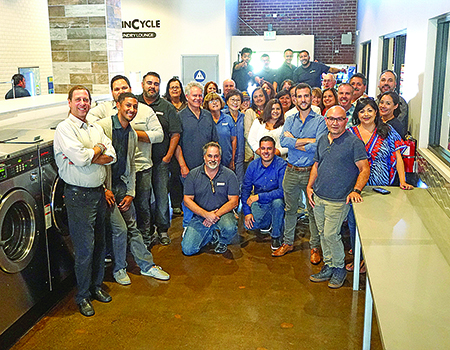 SOUTH GATE, Calif. — 2018 is a big year for PWS – The Laundry Company but the California-based distributor of laundry equipment knows a thing or two about big. After all, it considers itself the largest full-service commercial laundry distributor.

PWS is celebrating its 50th anniversary in 2018. The company founded by Mort Pollack, John Wickham and Bernie Steinberg got its start distributing for Speed Queen in Los Angeles in 1968, but bought out a Northern California distributor within a few years to expand its service area to the entire state.

In the final month of 2017, Brad Steinberg, a third-generation co-owner who joined the company 10 years ago, says, “Mort will be 91 on Christmas. His son, Brad Pollack, is my partner; that’s two generations of Pollacks. John Wickham was originally around but he was bought out in the ’80s, so he’s no longer part of PWS.

“Bernie Steinberg was my grandfather. He passed in the ’80s. My father (Eric) ran the company along with Mort for years, and now I’m third-generation.”

The three founders each specialized in a certain aspect of the laundry business that, when combined, made PWS a formidable company, the younger Steinberg says.

“Mort was the brokerage specialist,” he explains. “He specialized in selling existing Laundromats. John Wickham was the equipment guy; he had the Speed Queen distribution prior to 1968. Then, my grandfather, Bernie, was building new Laundromats and selling turnkey Laundromats.

“The three of them kind of came together to form the foundation of PWS, and other distributors around the country.”

PWS continues to focus on this foundation, but has evolved into a tech-focused company.

“This entails building the best eCommerce site in the industry, using technology in our service department and also to assist with customer service,” Steinberg says. “We believe in giving a lot of free services to Laundromat owners because if they are successful, we will be successful.”

Today, PWS employs 85 people in maintaining its equipment/parts, brokerage and new store business in California and Nevada. Its headquarters is here in South Gate, and there are offices in Redwood City and San Diego.

Unique about the South Gate facility is what’s next door. The ultra-modern SpinCycle Laundry Lounge had its grand opening exactly one year ago. The 3,400-square-foot store pairs the industry’s latest equipment technologies with upscale furnishings and amenities, with an interior that more closely resembles a coffee shop than a traditional laundry.

Plans are in the works for PWS to build a similar store in San Diego and also expand into a larger office and warehouse there.

What is PWS’ vision for its next 50 years?

“To continue to properly satisfy the Laundromat community,” Steinberg says. “We believe that the industry will be around for many years to come, and we want to partner with strong operators that will continue to push this business into the future.”