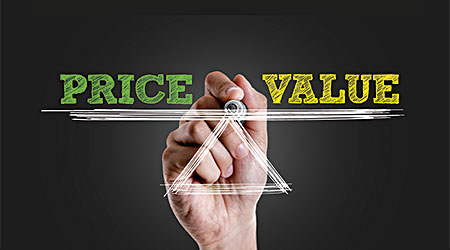 Are formulas available to easily calculate what a laundry should be charging?

CHICAGO — Pricing of wash and dry cycles is quite literally the foundation of any self-service laundry business. The decisions you make now can make or break your operation down the road.

There are a lot of variables at play in your store or stores, plus there’s the pressure you might feel from a nearby competitor willing to price their equipment lower than yours.

But upon interviewing representatives from some of our industry’s distributors, it became clear that no matter what data or experiences you may use to set prices, it’s important to balance vend price with service value. The greater the value you provide your customers, the higher the price they’ll be willing to pay.

Let’s hear what those distributor company executives have to say about pricing strategies and their recommendations for investors as well as current store owners.

WHEN IS BEST TIME TO RAISE PRICES?

Is there a time of month or season of year when it’s best for a store owner to implement a price change?

“The best time to raise prices is when you’ve done something in your store,” says Dan Baker, vice president of The Minnesota Chemical Co., St. Paul, Minn. “And it could be anything, from equipment to a coat of paint. Any kind of improvement, in my opinion, is a reason to raise pricing.”

“Price increase may be implemented anytime. Change may occur before the beginning or mid-month, based on payday or government-issued checks,” according to John Antene, president of coin laundry sales and marketing for Coin-O-Matic, Alsip, Ill. “Annual increases may be considered prior to busy seasons: spring and autumn. The advantage of the multi-pricing equipment and network systems is that any change increase or decrease can be easily made and continually updated and programmed automatically throughout the year.”

“I would imagine that the summer months would make the most sense,” says Greg Reese, sales manager for Commercial & Coin Laundry Equipment Co., Gulf Breeze, Fla. “Customers frequent the laundry less due to the decrease of clothing to be laundered and therefore would not feel the effect as much.”

“I always lean toward raising it right before school starts in the fall, so, generally, the end of August or maybe the beginning of September,” says Bill Kelson, director of vended laundry sales for TLC Tri-State Laundry Companies, Atlanta.

“I wouldn’t say there is a particular month or time to raise prices, but rather after an improvement or modification in the laundry,” says David Hoffman, sales manager for Gold Coin Laundry Equipment, Jamaica, N.Y., “such as equipment replacement or interior improvements like painting or new lighting.”

“A lot of people do it in the off-season,” says Robert Gonzalez, vice president of Steiner-Atlantic Corp.’s coin laundry division in Miami. “Lot of places here in Florida are seasonal, so they do it off-season. When the snowbirds return, prices are higher.”

Advanced equipment controls have given store owners great pricing flexibility but does a laundry risk alienating customers by changing prices too often?

“With the store owner’s ability to customize time-of-day pricing utilizing a network system, users are able to take advantage of possible discount pricing at off-peak hours, which, of course, are advantageous for the laundry customer as well as easing busier times in the laundry,” Antene says. “This is designed to increase business as a marketing tool and promote customer loyalty.”

“Yes, customers do expect some sense of stability in pricing,” Reese comments. “The store owner should forecast out for a year or more on potential utility cost increases when setting those vend price changes. Structure the increase to include those future additional expenses and avoid making frequent changes as a reactionary tactic.”

“I think store owners should take advantage of the new flexibility the controls can offer on the new machines,” Hoffman opines. “It gives you the ability to offer time-of-day pricing and tiered pricing, which can be great marketing tools to bring in customers on your slower days, but I would recommend to keep the promotion pretty simple and straightforward.

“I would not recommend changing prices too often as that can annoy customers. I would say no more then once every one to three years, depending on your improvements in the store.”

“I don’t think you should change prices every quarter, or maybe every six months,” Baker says. “Then you may start to alienate people. But if you did it every year, I wouldn’t have an argument with that.”

IS THERE A FORMULA TO CALCULATE VEND PRICES?

Are formulas available to easily calculate what a laundry should be charging based on number of machines, load capacity, utilities costs, etc., or are there just too many individual variables per operation?

“There isn’t a cookie-cutter,” says Ryan Smith, president of Aadvantage Laundry Systems, Garland, Texas. “I can’t tell you that we’ve built two stores the same way—and we’ve built a lot of stores. … Yeah, you can create formulas and spreadsheets that identify where you should be. There are a whole host of variables that come into play. Ultimately, I go back to differentiating your business. What is your core draw for your customer base? Form there, I would calculate where I want to be in the market.”

“With today’s advanced controls, operators have the available information at their fingertips to determine marketing formulas or patterns,” Antene says. “With the benefit of reporting totals in networking systems, laundry owners will be able to determine factors that will establish trends such as usage peak periods and slower times. With these reports, an owner will be able to raise or lower vend prices to maximize revenue.”

“Ultimately, there are too many variables to have a steadfast formula,” Reese laments. “A store owner should command a vend that represents the quality of overall product that they offer their customer base. Should the store be attended full-time, kept clean, have plenty of parking, and offer reliable equipment of various capacities, then the store owner should expect a top-tier price.”

“I’m not aware of a formula that people use,” Baker says. “Good operators know what their costs are.”

“It’s pretty simple: (charge) 10 to 15 cents a pound,” Kelson says, explaining that he developed that guideline based on 30 years of industry experience. “So if you have a 20-pound washer, you might charge 14 cents a pound. That’s roughly $2.75. If you’ve got an 80-pound machine, give a little bit of a discount, charge about 11 cents a pound. That’s about $8.75 for a cold-water wash.”

“I don’t think you can easily calculate all your expenses nor should you base your pricing on that,” says Hoffman, “but rather maximize your prices based on the neighborhood you are in, the competitors, and the condition of your store and the value you offer your customers.”

“There are a lot of variables,” Gonzalez says. “If you have a new store, obviously you have the equipment payment, and your location. Obviously, you at least want an ROI on your money. After the first year, you want to start making at least 20%, so you have to calculate your prices based on that.”

Coming up in Tuesday’s conclusion: Do payment methods influence pricing? What promotions do customers favor most? When your competitor undercuts you, what can you do?