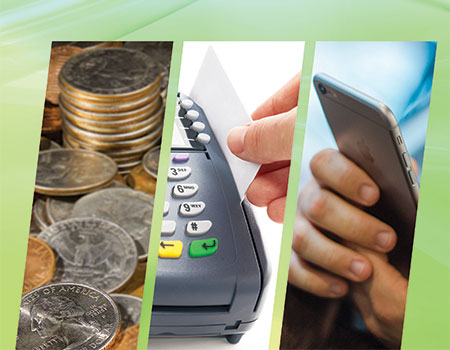 Coin is king but alternate systems challenge the throne

CHICAGO — For many years, the self-service laundry industry has operated on the simple premise that a customer can wash or dry their clothes by placing a predetermined number of coins into a mechanism connected to a washer or dryer and insert them into the machine.

Yes, payment by coin continues to be the preferred method used in Laundromats today, but the times are—pardon the pun—a changin’. The share of cashless stores—“coinless” is probably a more apt description—is growing larger year by year, it seems.

Depending on the payment system, customers can transfer a dollar amount to a “store card” or “loyalty card” (using cash or a credit/debit card; systems vary) that is then used to start the vended washers/dryers in that particular store, or can use a credit, debit or EBT (electronic benefit transfer) card to start a machine. Some systems enable stores to accept coin, credit card, store or loyalty card, or a combination.

And gaining traction in the industry are app-based payment platforms that allow customers to pay for laundry services using their mobile devices.

Store owners seem to be taking notice of the expanded payment choices. In this publication’s annual State of the Industry survey for 2017-18, roughly 65% of store owners polled said they operate coin-only stores, 6.9% operate card-only stores, and 27.8% offer both payment methods. The shares of card-only stores and so-called “hybrid” stores both increased from the prior year’s unscientific survey.

Based on those survey results, store owners are seeing the advantages that cashless payment systems offer but still believe in offering coin payment, too.

But will there come a time when cashless finally overtakes coins as the preferred payment method used in Laundromats?

Let’s hear what some experts have to say about today’s payment trends and where they see things going as consumer preference and equipment technology evolve.

COIN IS DOMINANT—BUT FOR HOW LONG?

So why does payment by coin/cash remain the dominant payment type in vended laundries?

“I think there are several reasons,” offers Wayne Lewis, sales manager for ESD Inc., which offers both mechanical and electronic payment systems to laundries. “No. 1, the investor or store owner group is still very diversified … I think a lot of them still feel most comfortable in dealing with what the customer base has been used to for years and years, which is coin.

“I think it’s a misperception from their standpoint, they just have a feeling that their customer base, for whatever reason, that they just wouldn’t adopt the use of a card payment system. They never want to risk losing a customer.”

“I think ‘old habits die hard,’” says Steve Marcionetti, president of Card Concepts (CCI), which makes payment systems that accept coin, credit/debit cards, and loyalty cards. “Many distributors and operators have been running with coins so long, they are resistant to change. The value proposition has not yet sunk in with many and so they overly focus on the initial investment rather than the return on investment.”

But Marcionetti says his team is seeing an increasing percentage of existing stores either installing a hybrid system (coin/card) or a card-only system.

“In one word: demographics,” says Butch Bruner, president of Imonex, a company known for its mechanical coin drops that recently introduced a multi-coin plus integrated smartphone payment system. “Coins are universally known by members of every socioeconomic class and remain the most intuitive vended payment format.

“The journey toward cashless payment has been fraught with friction—barriers the public prefers to avoid when performing an otherwise simple transaction. Just because a device accepts non-cash payment doesn’t necessarily mean people will accept it.”

“It’s really quite simple — while credit/debit and mobile payment use is generally increasing, many customers, and especially those of Laundromats, still do not have access to credit cards or prefer to pay with cash,” he says. “Although it’s important to accept credit/debit cards, cash is still king.”

“While that statement is true, if you analyze it a little closer, you will realize the trend has changed,” comments Michael Schantz, president of Setomatic Systems, whose company offers a system that accepts all forms of payment. “I think you will find the majority of new builds and retools in recent years accept some other form of payment besides coins. You need to in order to remain relevant and competitive.”

In Part 2 coming Thursday: The benefits of cashless, and mobile is on the move