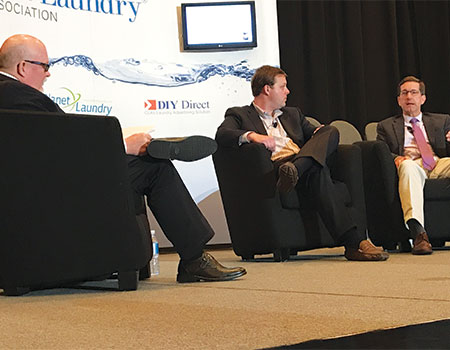 LAS VEGAS — Vended laundry owners and dry cleaners are using each other’s expertise to increase their market share, and this summer’s Clean Show served as the forum for representatives of each to explain what it takes to make such a partnership work.

The joint Coin Laundry Association/Drycleaning & Laundry Institute education session featured Stephen Moore, owner of PressBox Cleaners in Atlanta, and Chris Balestracci, president of Super Wash Laundry, East Haven, Conn. Moderating was Jeff Gardner, who calls himself “The Laundry Doctor” and is a member of both associations.

Moore, previously a civil engineer by trade, started in the industry five years ago as a drycleaning route operator but now owns and operates a full-service plant. He farms out wash-dry-fold business to a subcontractor.

Balestracci has been a laundry owner since 1988 and currently owns two stores. Gardner says Balestracci has always worked with dry cleaners in providing those services through his laundries.

“The top thing, if you’re going to consider going with a dry cleaner or a Laundromat, is the reputation and the relationship that you might have with them,” Balestracci says. “Two of the key things we always looked at is their delivery schedule—can they do a five-days-a-week, consistent delivery schedule?—and also the quality of their product.”

Try quietly dropping off your personal dry cleaning at the establishment you’re weighing as a partner, he suggests, to see how it treats your order and how successful it is at cleaning your garments.

When he was first in the market for a laundry partner to process wash-dry-fold for his drycleaning operation, Moore initially considered candidates based only on their proximity to his routes.

“Very foolishly, the only thing I took into consideration initially was location,” he says. “On my routes, I wanted to find wash-dry-fold that integrated into our logistics, where our routes were going. I found out very quickly it’s much more complicated than that.

“It’s very, very important to align yourself with a wash-dry-fold provider that’s going to do the same quality, the same consistency.”

And it might take a while before you find a partnership that’s solid. Moore says he’s on his fifth laundry provider, and their current deal is two years old.

“We’ve made mistakes all along the way in figuring out those important factors about who we were working with,” he admits. “Very integral to that was their ability to work as a partnership. We’re not just doing transactions. We have to work closely together, be in each other’s business, so it’s not like we’re just dropping off clothes and picking them up. There are daily conversations about what’s going on and how we’re interacting. It’s almost like we’re one company, even though we’re owned separately.”

Don’t be tempted to sign on the dotted line just because Company A’s wholesale price is the cheapest, says Moore.

“They have to cut corners,” he explains. “They can’t treat your customers well. They can’t handle claims properly. Even though the margins may look more attractive, it’s going to cause you more problems in the long run.”

“The big key is your front line, your employees,” he says. “When a drycleaning customer comes into your Laundromat and drops off stuff, you need to make sure you’ve trained your attendant to look for the material—silk, rayon or linen—to see if there are any holes or rips that will become worse as it goes through the drycleaning process. Is it beaded? Is it an iron-on thing that’s going to come off in the drycleaning process?

“Your front-line attendants really are the ones … to look over the item and say, ‘Should we do this or not?’ You shouldn’t do every single item. That’s going to prevent a lot of problems down the road, if your attendants are sharp and on the ball and caring about the customer’s clothes when they come in.”

Balestracci’s employees follow their drycleaning partner’s lead in unbuttoning shirts, emptying pockets (and saving their contents), removing collar stays, and placing tags so they are readable and don’t bring harm to the garment.

Both men say that point-of-sale systems are invaluable when it comes to coordinating laundry or drycleaning services between separate facilities.

“The first Laundromat I worked with, we literally had a ledger that hung on the wall,” says Moore. “When our drivers dropped off orders, they were writing them on there. When we were picking up the bags, they were crossing them out. That was the level of sophistication with that particular Laundromat.

“We realized we needed to be more involved in the process. We found a partner who had the same mindset. We’ve actually implemented our point-of-sale system that we use at our drycleaning facility, it’s now (in use) at the Laundromat. … Even though someone else is handling the work, we can keep tabs on it.

“It also makes for seamless billing. We know, in real time, how much we owe the Laundromat. And they know it’s accurate, because that’s how we get paid (by the customer).”