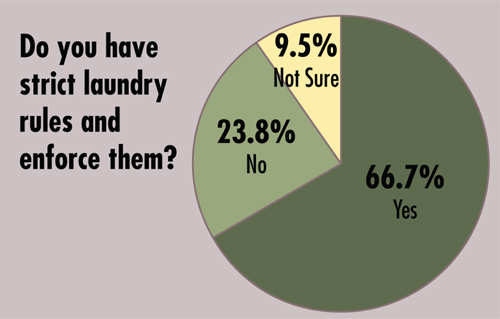 CHICAGO — A majority of operators (62%) believe their customers are the best laundry customers or are at least better than most customers, according to the most recent Wire survey. Nearly 24% of respondents say their customers are no better or worse than other laundry customers, and 14.3% say their customers are worse than most other customers.Despite the somewhat positive customer reviews, owners still deal with plenty of customer headaches. Owners were asked about the customer problems that they deal with on a consistent basis. Seventy-eight percent of the respondents say littering is a problem, while 72% say customers overload machines.Here are some of the other problems: “Customers don’t watch their children and problems result” (44.4%); “Customers are dishonest (stealing, looking for unjustified refunds, etc.)” (22.2%); “Customers damage the store (walls, seating, floors, etc.)” (16.7%); and “Customers physically damage/abuse the machines” (16.7%).Keeping things running smoothly at the laundry sometimes requires “running a tight ship.” In a laundry’s case, this means having strict rules and enforcing them. We asked laundry owners about their rules and enforcement policy. Two-thirds of respondents say they have strict laundry rules and enforce them. Twenty-four percent say they don’t have strict rules, and 10% aren’t sure if the rules they have can be considered strict.No operator really wants a customer situation to get out of hand. However, trouble can escalate at a coin laundry. Fifty-seven percent of respondents say they have had to call the police at one time or another because of customer behavior. Forty-three percent haven’t had to make this call.On a more upbeat note, 85% of operators have never gotten into a physcial altercation with a customer. Fifteen percent say they have had some type of physical tussle with a customer.With an eye toward safety, and with stores becoming more and more expensive to open, it’s not surprising that operators are utilizing some type of surveillance system. Seventy-one percent of respondents use some type of surveillance system at their store.