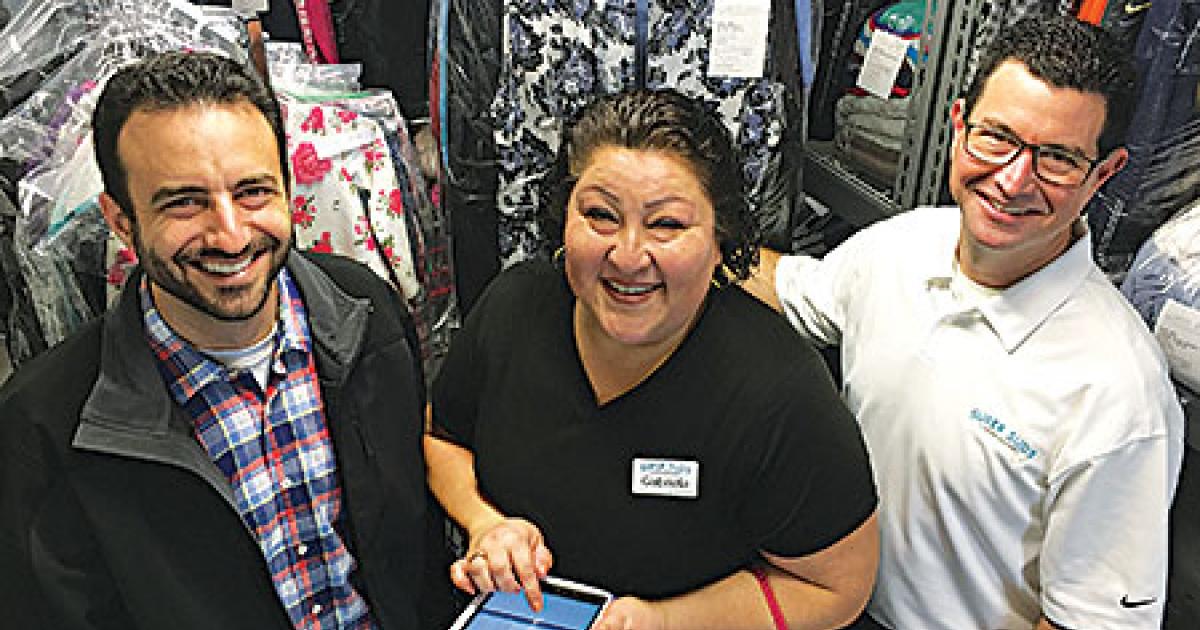 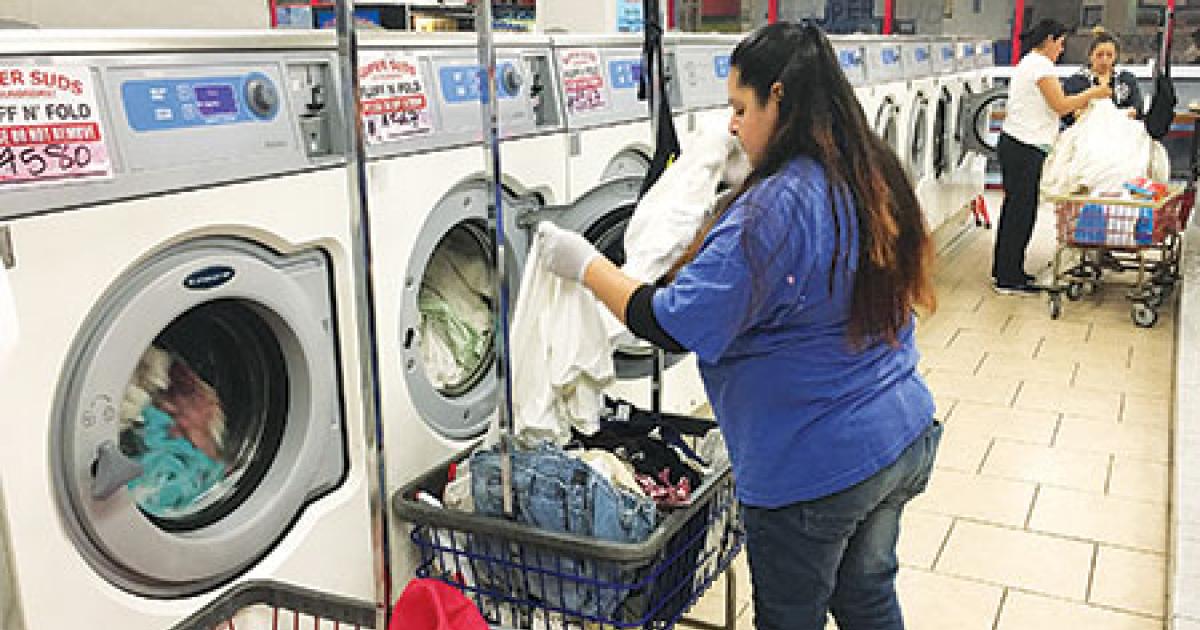 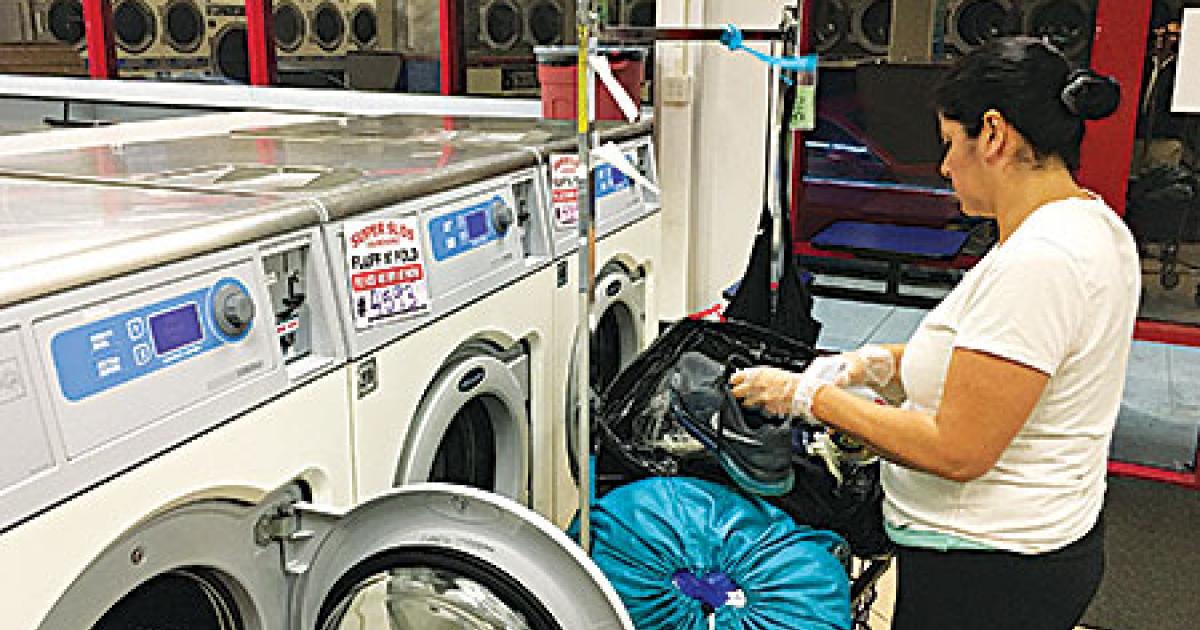 With the front door locked, attendant Gloria Ortiz has plenty of working room to process the first of several customer loads she will tackle at night.

LONG BEACH, Calif. — It’s approaching 10 o’clock on a moonlit Wednesday evening and business is winding down at Long Beach’s coin-ops. But in the 200 block of Alamitos Avenue, they’re ready to burn the midnight oil. Welcome to the Super Suds Laundromat, where an overnight shift handles the extra load brought on by a digital shift.

As the last patron departs, 15-year veteran employee Marta Mendoza puts the finishing touches to the last of the 212 pounds of wash-dry-fold she completed that day. Co-worker Heather Padilla is busy mopping up a rear aisle.

Meanwhile, over at the nearby customer service station, a fresh urn of coffee is being put on. Malena Juarez, Gloria Ortiz and Yesenia Sierra emerge from the storage area wheeling out carts laden with bundles. They’re set to commence an overnight ritual that will culminate just before dawn with hundreds of pounds of freshly laundered items ready to be retrieved or delivered.

With the doors locked and the aisles free of customers, entire rows are commandeered, gloves are donned, dual-denomination tokens are readied, and the triggers pulled on an arsenal of pre-treatment sprays.

Erasable marker signs with magnetic backing are slapped on washers and coded to ensure the laundresses know when one order ends and another begins. And because each is processed individually — not batched — there’s a lot of iron needed on the floor. That’s not an issue for this mammoth, 8,000-square-foot venue boasting a ton of wash-and-dry capacity spread amongst 83 front loaders and 101 tumbler pockets.

I was invited to stop back on Saturday night for the real fiesta, when a full crew of five livens up the graveyard shift by cranking up the music and transforms the 1,200 pounds of fluff ’n fold into dance ’n fold.

The need to run loads in the wee hours began a couple of years back when the volume of incoming drop-off and commercial bundles ramped up dramatically, setting off a turf war between self-service customers and Super Suds employees vying for machines during the 16-hour window when the doors were open.

Frustrated patrons took matters into their own hands by pulling out ticketed loads at the end of their cycle, resulting in mix-ups, missing garments, and a disruption to wash-dry-fold productivity.

Addressing the competition for machines was just one of many challenges facing Aaron Simmons, who six years ago brought his computer information systems background to the family business he’s now charged with.

When the then-39-year-old arrived on the scene, it was largely a do-it-yourself affair at the front of the house. Today, it’s the baskets of drop-off coming through the door and cartfuls of laundry picked up from residential and commercial accounts in a swath of the Southland that has the back of the house overtaking the revenue stream of what was always a thriving self-service trade.

The bread-and-butter remained up front where the expansive frontage along Alamitos and ample rear parking lent itself to multiple entry points for customers to avail themselves of a series of back-to-back washer rows and a U-shaped perimeter of dryer tumblers. The equipment is complemented by a children’s play area, overhead TVs, centralized vending and change-making, and even a glass-enclosed exhibit of antique laundry implements.

A loyal wash-dry-fold following grew as word-of-mouth spread of a quality finished product, translating into annual sales of $75,000 by the time Aaron came on board in 2010. When he took the laundry to the Internet, the initial launch and relaunch of the website generated more new business at the counter than at the machines, with drop-off revenue hitting $90,000 in 2011 and breaking six figures with $120,000 in 2013, the operator reports.

The healthy bumps motivated him to collaborate three years ago with Virginia Beach, Va.-based Marathon Consulting to refine Super Suds’ online presence with a responsive website that was search engine-optimized, plus commit to budgeting up to $1,400 per month toward digital marketing. During that brief timespan, Aaron notes, attendant-processed laundry grew 280%, tallying $335,000 in 2016 with “no sign of slowing down.”

Among those who have witnessed the surge in activity is Mary Miller who, along with Luis Estrada, were hired two decades ago and serve in key capacities.

“Our fluff-and-fold (service) was growing and now it has just exploded,” Miller says. “Aaron has taken this business to a new level.”

While shifting a majority of the labor-intensive bundle processing to overnights cleared up aisle congestion, a more daunting task laid ahead in the back room. Simmons still faced the shortcomings of a burgeoning laundering service that relied on an archaic system of handwritten forms, spreadsheets with tracking data that was input manually, and disheveled shelving.

Pen ’n paper was not the ticket for fluff ’n fold as customer contacts and special laundering instructions frequently needed deciphering, payment logs were occasionally incomplete, and queuing up orders for prioritization required hand-sorting. Perhaps the most embarrassing was when a finished order was lost in the shuffle and the customer had to join the search.

“When you’re only doing a couple hundred pounds a day, it’s really easy to find orders and not make mistakes,” Simmons says. “It’s really easy if you’re only helping one customer every few hours dropping off or picking up. It’s when you’re growing the business and pushing it that you realize it’s a process, a service.

“Customers expect a higher level of service because they’re paying good money to have us do their laundry. This is now a whole different business than self-service. You’d depend on the employee doing everything perfect for it to work without mistakes, and that didn’t happen.”

Something little, like clear labeling of storage shelving, just needed tweaking. But as he watched the trending exponential growth, Simmons says a complete overhaul from scribbling on a three-part ticket to a world of tapping keyboards and tablets was in order.

“As we got busier, it wasn’t just one person standing at the window; now we’ve got two, three, four people either waiting to drop off or pick up,” he explains, “so we needed a way to quickly process multiple customers.”