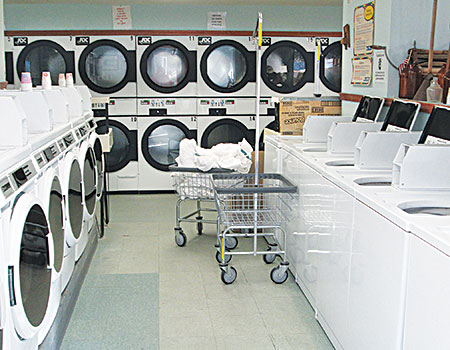 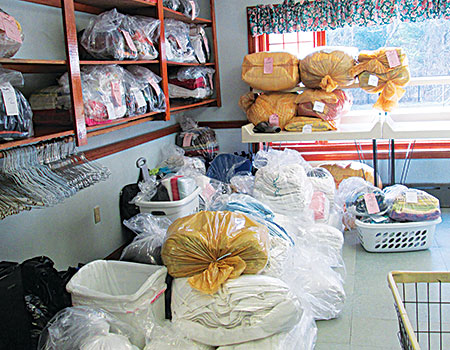 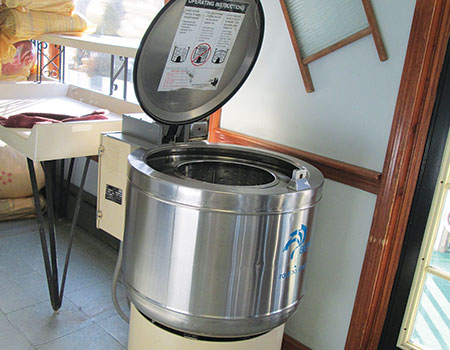 There is a wooden clapboard house on the road heading to the beaches of Marshfield and Duxbury, Mass. If it weren’t for the self-standing sign out front, and the old-fashioned barrel washing machine sitting on the ground, one might think it’s just another summer place by the seashore.

But it’s Jack’s Scrubboard Laundromat, now in its 28th year.

John Killion has run the business for 15 years. His father, Jack, started it in 1988. When Jack wanted to retire to Florida, the two made a deal. Jack owned the building, so John would pay rent to him. It’s worked, as last year was John Killion’s best, he says.

The homey look is intentional.

“I never liked the industrial look of typical Laundromats in malls,” Killion says. “This feels like home.”

Along a busy road, his business attracts a lot of patrons. The shop is open from 7 in the morning to 9 at night seven days a week. Killion lives in the upstairs apartment. Fortunately, he is Johnny-on-the-spot. Unfortunately, he sometimes gets knocks on the door during his off-hours.

“It’s all part of doing business,” he shrugs.

To service his clientele, Scrubboard has a dozen 10-pound washers (“singles”), a half-dozen 18-pounders (“doubles”) and five 45-pounders (“triples”). A bank of 18 dryers aligns on one wall. An extractor is available to service his customers with comforters, dungarees, and garments that really need to be spun out. “It costs 75 cents (to use),” he says, “and customers really appreciate that I have the machine, because not too many Laundromats own one.”

The biggest portion of Scrubboard’s trade—about two-thirds of it—is wash-dry-fold service (WDF). Many customers bring in clothes and pick up a few days later. Also, Killion maintains a WDF route that services 50 customers.

Killion employs three part-time helpers who attend to the customers and process most of the WDF work; they each work about 20 hours a week. The staffers live nearby, are hard workers, and appreciate the hours, he says. But much of the work falls on Killion. His typical workweek is 60 or 70 hours, depending on the season.

Within the last 10 years, Killion has replaced every machine. They had been there from the beginning and were breaking down all the time, he says. This required a $54,000 investment, not an insignificant sum. But Killion will pay off the loan in a few years and be free and clear.

“The new machines are tight as a whistle,” he says. “My utility costs have dropped.”

That’s good, because over the years, Killion has learned to fix all machines, and does most of the maintenance. Only rarely has he had to call a mechanic. With new equipment, he doesn’t have to spend much time on repairs.

Speaking of utility costs, Scrubboard’s monthly gas bill is now running about $800-$900 a month, Killion says. This is a lot lower than when energy costs were sky-high a few years ago.

For water, Killion uses his own well. The town bills him for sewage, so his water bill is not excessive, no more than a few thousand dollars a year. Finally, electricity is running about $800 a month. That’s a manageable utilities expense.

“It used to be 10 minutes for a quarter, but increasing utility costs have forced me to cut the price,” Killion says. “I have very little price complaint from customers, and we feel our prices are fair.”

It helps that there is only one area competitor, whom Killion says has older equipment and high-tide flooding problems.

A few nifty touches adorn the premises. Scrubboard sets out a half-dozen paper cups on each machine for detergent. An active bulletin board sits at the front of the store, allowing customers to browse. A bank of seats in the front encourages customers to relax while waiting for their laundry to finish. A television sits on top of the washers. Washboards given by customers hang on the walls.

“Everyone loves (our) name because it reminds them of the old days,” Killion says. “When a customer offers to give me a washboard now, I refuse. I simply have no more space to hang them.”

All these touches help give Scrubboard a homey feel, exactly what management has in mind.

Killion talks about buying another Laundromat. Hopefully, he’ll give it the same cozy look and feel.

Miss Part 1? You can read it by clicking HERE.