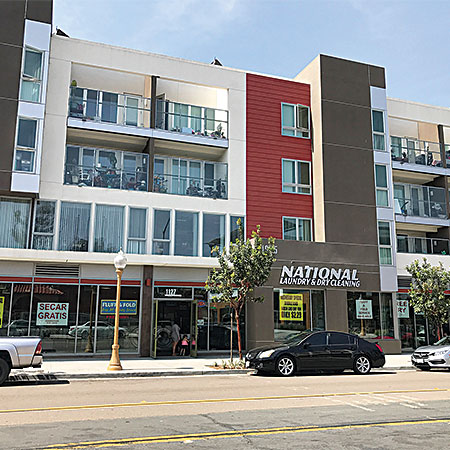 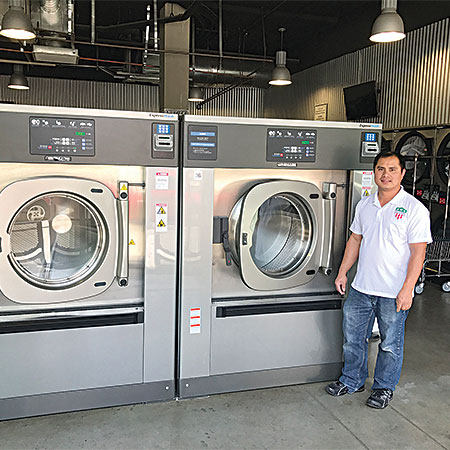 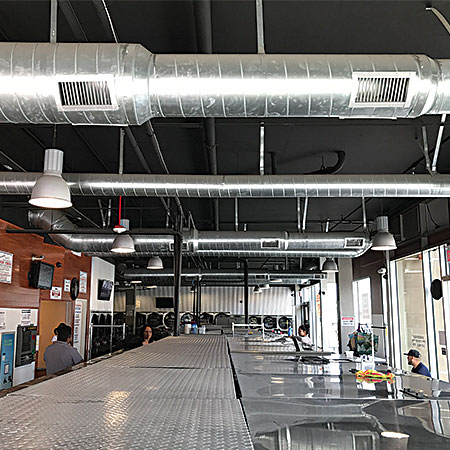 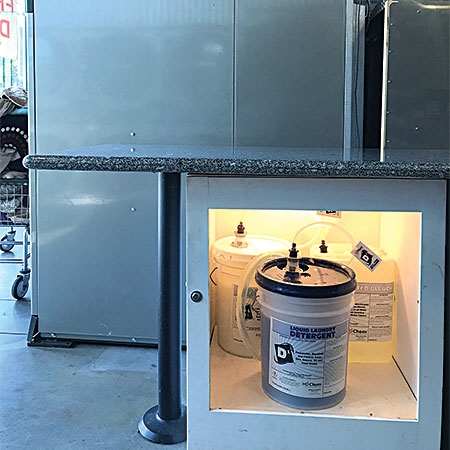 Owner Duong makes most of high-speed and large-capacity equipment

“I owned a nail salon with my wife and worked as a corporate employee for many years,” he says. “I have two young boys and was working seven days a week, 12 hours a day. I quit my corporate job to focus on the nail salon. I still worked just as hard. It got old. That’s when I decided to look at different businesses.”

Hoping to learn more about the vended laundry industry, Duong attended a vended laundry symposium hosted by Elite Business Investments and Continental Girbau West. He took in presentations on vended laundry development, ownership and equipment and came away favoring Continental ExpressWash® Washers over other brands.

“I liked the idea of owning a high-speed store where customers could wash, dry and fold laundry in less than an hour,” says Duong. “I did Continental’s ExpressWash comparison online and decided I liked the freestanding ExpressWash Washers more than competitive brand machines.”

By generating higher extract speeds than most hard-mount washers, which typically max out at 200 G-force, ExpressWash Washers remove more moisture from every load. This cuts dry time, reduces utility costs and improves customer turnover, according to Sorensen.

After Duong researched the industry and related equipment, he phoned Elite’s Carol Dang. She works closely with vended laundry investors and owners to sell and purchase existing laundries, as well as renovate them. Dang’s team at Elite also specializes in new vended laundry development.

Dang searched on Duong’s behalf for potential laundry locations for new store development, as well as existing laundries for sale. She contacted multi-laundry owner Brian Voytovich to investigate a laundry of his that was for sale.

“Brian gave me a brief rundown of the location, income and expenses, and I called Phong,” says Dang.

Duong responded by purchasing the store.

“I couldn’t ask for more,” he says of his new laundry. “Carol has done an excellent job helping me and I’ve learned a lot from her along the way.”

Six hard-mount, 75-pound-capacity Continental PowerLoad Washers are the store’s most popular machines: “Customers line up to use them,” says Duong.

“He said he needed some larger machines,” she says. “I sold him two 90-pound-capacity ExpressWash Washers with automatic chemical injection.”

Duong alleviated the backup at the 75-pounders by replacing four 20-pound machines with the two 90s.

“Customers are loving them,” he says. “The 90s automatically inject industrial detergents, bleach and softeners at precisely the right time during the wash process. Customers just load, select a cycle from the ProfitPlus Control, and press start.”

The new ExpressWash 90s bring customers a high-quality wash in 32-40 minutes; make National Laundry and Dry Cleaning unique; and boost revenue in the process, according to Duong.

He showcases the injection system and detergents in a clear Plexiglass cabinet underneath a folding table: “That way, customers can see how it works. The machines are big, and the detergent injection is really convenient. Most other stores don’t have that.”

The large 90s also help with processing commercial and residential wash/dry/fold, according to Duong. Looking to grow this segment of his business, National Laundry and Dry Cleaning provides pickup and delivery, along with a turnaround time of 24 hours for commercial laundry orders.

“We are located really close to a Naval base and the sailors bring me a lot of blankets, jackets and bed sheets,” he says.

A Card Concepts Inc. (CCI) electronic card payment system simplifies laundry management for Duong. It allows him to remotely issue cards and refunds, launch in-store promotions, monitor machines and check revenue, among many other capabilities. Offering a free daily dry for every wash swipe and Wednesday deals on the 20-pound washers, he builds customer loyalty and revenue.

“I love being a vended laundry owner,” says Duong. “I don’t have to work seven days a week anymore because I can manage the laundry remotely using the card system. I can even process refunds when I’m not at the shop.”

Haley Jorgensen is a freelance writer operating from her business, Public Image, in Green Lake, Wisconsin.